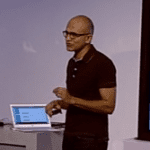 Listening to Satya Nadella’s first public pitch session as CEO, unveiling a momentous event in Microsoft history, the cross-platform, “post-PC” launch of Microsoft’s flagship Office franchise to the Apple iPad, was a “wowser” of a premier that quickly turned into an “owser” of a pitch. This was Microsoft’s chance to dazzle. But, likened to the first day of  new baseball season, the batter was brushed back by the pitch.” The strategy seemed like it came straight out of the Steve Ballmer playbook. Defeat was snatched from the jaws of victory.

What could have been a globally disruptive event, namely the seamless penetration of the Office global standard, immediately displacing all that came before it in tablet word processing-spreadheet-slide show ecosystem, was instead a kind of bait-and-switch affair.  Microsoft Office for the iPad is crippled unless and until you sign on for a $100 a year annual subscription to Office 365 including the new InTune “cloud-based mobile device management solution,” and Azure Active Directory service.

Until you do, these Microsoft Office apps are read-only. No print, no edit, no kidding.

Is this how Microsoft intended to take the iPad world by storm? By serving up a crippled app that costs nearly the same as the desktop version? We thought Ballmer had “left the building.” 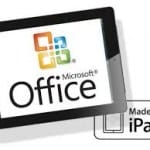 Forget “freemium,” the least that Microsoft could have done was give millions of iPad owners a taste of the fully-featured app, at least 60 to 90 days of comp licensing, but no-o-o-o-oh!  Microsoft wants $100 each for Word, Excel or Powerpoint, sight unseen. The crippled version is unlike a free trial version that lets you run the app unencumbered by feature restrictions.  What was Redmond thinking?

We’ll let you try and translate the new generation of presentation stagecraft”  Here are two of the more mind-bending statements from the press conference:

“Everything that we do going forward is grounded in a world view which I describe as the world of ubiquitous computing and ambient intelligence. It’s an amazing canvas for innovation.”

Another new word is “high-fidelity” computing, so that the more than one billion Office users can have a high-fidelity Price experience on whichever device they want to use. With iPad it’s Hi-Fi over Wi-Fi!

It’s impressive to witness Microsoft unveiling an “all devices, all the time” strategy on the very first day it opens its Office suite to the world’s largest installed base of tablet users.  Now if Redmond will allow us to test the new strategy before we spend $100 an app, that would promise even higher fidelity for all! [24×7]