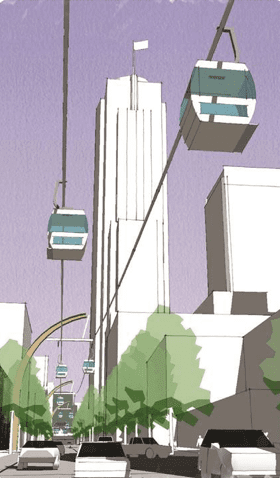 Move over P.T. Barnum!  You too, Ringling Brothers and Cirque de Soleil. Seattle is about to become an even more spectacular, three-ring, “Big Top” of derring do and high-flying amusement among America’s cities to a degree not seen since the 1962 World’s Fair.

Following the arrival of The Big Wheel on Pier 57, the same Seattle “amuse-ineers” are raising their sights again, this time with a proposal to spin off their giant ferris wheel with a Union Street Gondola ride linking downtown Seattle to the waterfront by airborne cable car.

Watching these sky pods bubble up from the waterfront to the Washington State Convention Center sounds positively uplifting for passengers and observers alike, like an EPCOT ride through a thriving urban rainforest.

Have we elevated your interest? You may be even more impressed by the lesser-known plans for other special thrill rides throughout the Emerald City. Here’s what may soon be captivating millions of locals and tourists alike on our metro’s new, carnival-like midway.

The Seattle Tunnel of Mystery — Ride Big Bertha, North America’s largest tunnel-boring machine through an underground maze that is anything but boring. You’ll travel a simulated 30 feet per day, eviscerating everything in your path, until the ride suddenly stops midway, a mysterious obstacle looming large, and you are asked to solve a puzzle before the ride can continue.  Is it a giant boulder, a sunken pirate ship, an alien spacecraft, or all three that stand in your way? Ticket prices promise to be steep as the ride has cost $3.1 billion to build, so far!

The Amazon Drone Shooting Gallery:  Take aim at the flying parcels whizzing above Lake Union en route to various Amazon lockers throughout the Sound.  A grab bag of gifts awaits you if your buckshot hits the propellors and the commerce-copter plummets to your feet.  A round of ammo costs just a buck for Amazon Prime members.

The Space Needle Elevator Drop — In off-peak periods, the Seattle Space Needle will be transformed, now featuring the same jaw-dropping, G-force plunge to the ground, and ground floor souvenir shop, as Disney’s infamous “Tower of Terror.” Ride this one before lunch.

The Madison, Seneca and Spring Street “Ski Ball Ramps:” Why get stuck testing the strength of your E-brake while stopped at a signal on any of these steep Seattle inclines, when you can be “skee-bowling” for prizes by rolling balls up the sidewalks alongside you? Like pinball, extra points are awarded if you careen your ball off one of the many faceted angles of the Seattle Central Library.

The Ballard Locks Ski Jump: Follow leaping salmon on their homecoming trek while riding a jet ski painted to resemble a King, Chinook, or Sockeye as you bridge the gap between Northwest saltwater and freshwater. Instead of tickets, your vehicle will be photographed in action and you will receive a Good-to-Go! e-bill in the mail. [24×7]