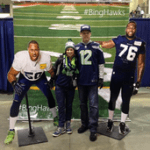 The hashmarks may be drawn on Century Link field every ten yards, but when the ground game goes online, it’s the hash tags from Seahawk nation that gain yardage even trouncing our NFL opponents’ social media plays.

#GOHAWKS and #LOUDER are two hashtags that are putting up impressive Twitter numbers posting 34,000 hash plays in the past two games alone. #BINGHAWKS collected the social media stats shown on the scoreboard below.

Which team’s fans run up the largest number of Tweets for the biggest scores? Compare @SEAHAWKS fans with 17,127 tweets to @ATLANTA_FALCONS and a mere 4,267.  The Hawks win by an even wider margin online, 4-to-1, than they did on the turf!

But the real stars of the game are the players themselves who let their Tweets speak as loudly as their on field performance draws cheers.

According to Bing, an official Seahawks sponsor: 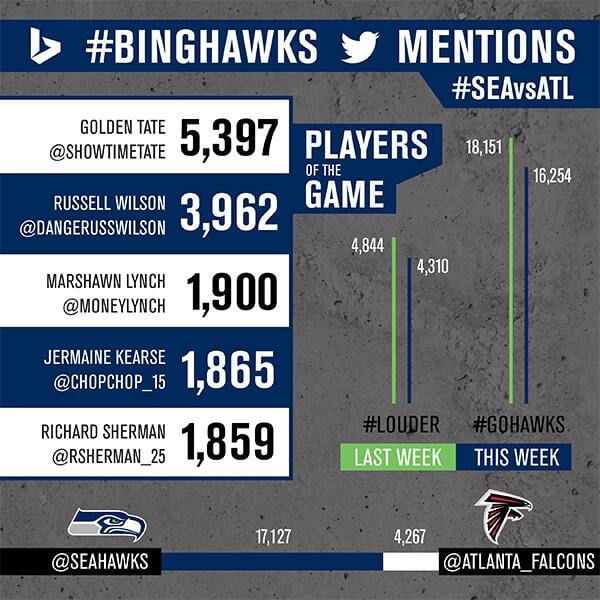 Golden Tate, @SHOWTIMETATE, currently leads all Seahawk players with the most authored Tweets at 5,400.

Russell Wilson @DANGERUSSWILSON has quarterbacked what’s on his mind 3,962 times.

Marshawn Lynch @MONEYLYNCH has broken through the defensive line and online with his tweets 1,900 times .