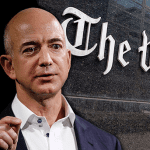 At a point in history when most Internet moguls think of newspapers as fading relics or “ink on dead trees,” the world’s leading E-paper evangelist, Jeff Bezos, is investing in the power behind the pixels, acquiring the storied Washington Post newspaper publishing business for $250 million.

Mr. Bezos is an E-print visionary and will surely be instrumental in helping the venerable news organization evolve into the next century of news reporting.  The Amazon.com chairman remarked in a prepared statement, “I understand the critical role the Post plays in Washington, DC and our nation, and the Post’s values will not change.” Of note, the acquisition of the company is not being made by Amazon but by Bezos himself through a private holding company.

Slate magazine, TheRoot.com and Foreign Policy are not part of the transaction and will remain with The Washington Post Company, as will the WaPo Labs and SocialCode businesses, the Company’s interest in Classified Ventures and certain real estate assets, including the headquarters building in downtown Washington, DC. The Washington Post Company, which also owns Kaplan, Post–Newsweek Stations and Cable ONE, will be changing its name in connection with the transaction; no new name has yet been announced.

“With Mr. Bezos as our owner, this is the beginning of an exciting new era,” said Ms. Weymouth. “I am honored to continue as CEO and Publisher.”

“The Washington Post Co.’s newspaper division, of which The Post newspaper is the most prominent part, has suffered a 44 percent decline in operating revenue over the past six years,” the report reads. “Although the paper is one of the most popular news sources online, print circulation has dwindled, too, falling another 7 percent daily and Sundays during the first half of this year.”

The Post Co.’s chief executive, Donald Graham, described feelings of “shock” over the “unthinkable” decision to sell the paper. However, he said that Bezos’ offer was one that demanded consideration.

IBT, owner of the International Business Times, announced last week that it is acquiring Newsweek after the 80-year-old magazine shifted to online-only in January and lost its chief executive in June.

IAC, run by Barry Diller, purchased Newsweek as part of an agreement with the late Sidney Harman in November 2010 and combined it with the Daily Beast news Web site. The billionaire this year said he regretted the move and started looking for buyers.

Harman had acquired Newsweek from The Washington Post for $1 plus assumption of liabilities.  [24×7]