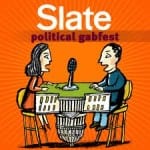 Marc Maron may have “locked up” the canonical designation as the Internet’s chief curator of the most historic “American Comedians” of the modern era, but when it comes to America’s “political punch lines,” (the category of “Politics” curiously evading the oeuvre of Comedy), another esteemed trio of Web pundits deserves kudos as the Web’s most erudite arbiters of our confounding and contradictory political system.

These three online personalities, each bearing a very unique, albeit potent, sense of humor, are the co-hosts of the Slate Political Gabfest. Each will be co-habitating, if not spawning, with the Puget Sound’s local Coho salmon and Killer Whales this week. If you are lucky enough to score a ticket, you will find the three trading barbs over the most gab-worthy of the current political season, including the results of the first 2012 presidential debate, the day after the debacle, on Thursday evening at Seattle’s Town Hall.  If any final tickets remain, they can be unearthed via the Gabfest Facebook page at  http://www.facebook.com/Gabfest.

The distinguished triangle of Slate political “punditeers” are geometrically “angled” by John Dickerson, a prolific journalist and the political director of CBS News, who also happens to be the son of the late, celebrated newscaster Nancy Dickerson (America’s foremost, top-tier, TV news anchorwoman), David Plotz, editor-in-chief of Slate, (lest we forget, a publication that began in Seattle as a pilot project under the tutelage of Microsoft and founding editorial director, Michael Kinsley), and the spouse of author Hanna Rosin who recently authored the book with the controversial title, “The End of Men,” but not of David, of course.  Thirdly, there is Emily Bazelon, an always-rational voice of reason, chess-like logic and legal analyses who is also a frequent “cover story” contributor to the NY Times Sunday magazine and presently a professor of Law inside the hallowed halls of the Ivy League’s Yale University.

Joining this cadre will be Seattle uber-personality and Gay Rights’ activist, Dan Savage, who probably won’t be be asked to explain how he managed to commandeer the Google search engine index and “crowd-source” the top two “Google-bombed” results for Rick Santorum and Mitt Romney, but will be on hand to take on other subjects, perhaps the Gay Marriage initiatives underway in Washington state among others. 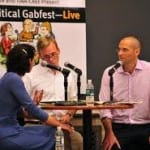 Microsoft sold Slate to its current owner, The Washington Post, in 2004, a fact which did not deter the “Gabfest-ocenti” in a recent Gabfest from criticizing the newspaper of the same name for its “Panda-monium” coverage of the recent Panda cub death at the Washington Zoo.  The Gabfest will be recorded and syndicated via the Web, including a Q&A session following the Webcast.  To replay the event, sign up via iTunes at http://itun.es/i6DP4G4

The Slate Political Gabfest is produced by Andrew Bouvé and consists of three topic segments followed by “Cocktail Chatter,” a medley of lighter news tidbits for weekend chit-chat.

Why it has taken Slate this long to return to its birthplace is a mystery.  Chalk it up to teenage adolescence. But now that the prodigal child has returned home, you are bound to  be impressed with its charms and maturity.  Provided, of course, you manage to show up like proud parents at Town Hall on Thursday night!  [24×7]