Home What's Brewing? Amazon’s Thanks is in the Giving: A Kindle Fire at Less-than-Cost!
Twitter
Pinterest
WhatsApp
Email
Print

Is Amazon surfing a wave of popularity and generosity at the outset of the 2011 holiday season by subsidizing the cost of the Kindle Fire?  “Black Friday,” the kindling point for year-end holiday shopping season ignition is but a few days away.  Word on the street is that the company is looking to ship up to 5 million more of the $199 color tablets by Christmas morning.  But at what price?

An analysis by of the tablet by market research and intelligence firm IHS iSuppli reveals that the company is selling the new Android-powered slate at a loss.  After disassembling the device and examining its components, the research firm determined that Amazon’s Build of Materials cost is $185.60, and its total cost including manufacturing-related fees is $201.70 per Kindle Fire. IHS had previously calculated its parts and manufacturing costs to be $209.63 per unit combined.

The assessment:  “The Kindle Fire, at a retail price point of $199, is sold at a loss by Amazon, just as the basic Kindle is also sold at a loss at the current $79 retail price point,” Andrew Rassweiler, senior director of teardown services for IHS, said in a statement. “Amazon makes its money not on Kindle hardware, but on the paid content and other products it plans to sell the consumer through the Kindle. This is a similar business model to wireless companies such as AT&T or Verizon. They sell you a phone that costs them $400 to $600 or more to make for a price of only $200. However, they expect to more than make up for that loss with a two-year service contract.” 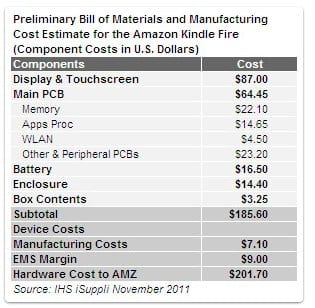 To see an actual physical breakdown of the color tablet device, watch this YouTube video.

Analysts speculate that both the Barnes and Noble Nook tablet and the Kindle Fire, but especially the Fire,  may “scorch the earth” and steal the thunder for the Android tablet market by setting the cost of entry so low, a fact that makes Google the  potential loser. So perhaps it is Google who is ultimately subsidizing the price break.  [24×7]

The fiber optic system now being readied in the Issaquah Highlands, officially known as the Highlands Fiber Network, is due to offer faster residential service — billed as the fastest Internet service available to any neighborhood in the United States.

The system plans to launch the speedier service Dec. 1. Organizers said users should expect download connections of 1 gigabit per second.

Seattle-based ISOMEDIA Inc., the Internet services provider and network operator for the Highlands Fiber Network, says it is developing  faster service plans in response to residents’ feedback and increasing demands for network and Internet bandwidth.

“This new, faster Internet service will bring more convenience and connectedness for our residents,” René Ancinas, president of Port Blakely Communities and CEO of Port Blakely Companies, said in a statement. “As a vibrant community known for progressive features and amenities, this enhances Issaquah Highlands’ attractiveness as a very desirable place to live, work and play.” [24×7]