The fact that Microsoft owns 1.6% of Facebook, having invested $240 million back in 2007 in an act that pegged the valuation of the Zuckernaut at $15 billion, is all but irrelevant to an end-user who uses the Bing search engine today and finds which one of their Facebook friends “liked” the object that shows up in Bing’s search results.

But it seems fairly likely that Redmond’s being granted a personalized search alliance with the social juggernaut is an outgrowth of the highly coveted business relationship.

The engine’s special Facebook section now details which of your friends expressed an interest in any link that fits the topic de’ search. Bing has also initiated Facebook Profile Search which generates Facebook links when you search a person’s name. The ranking algorithm is very clever.

According to Bing: When searching for an individual, Bing looks at a person’s Facebook network and surfaces results that make the most sense based on the relationships the searcher has with people on Facebook. For example, results for common names such as “Bob Smith” will be ranked higher if a person shares mutual friends or networks. This “social distance” is used to provide people with the most personally relevant answers for people searches.

Bing points to the many decisions people make every day, both small and large, that rely on the advice of others to help answer a question. For example:

· Should I see the movie Inception? Would I like it?
· Should I buy an extended warranty for my new car?
· What is the most interesting tourist site in NYC?

These types of questions are best answered if you ask someone who knows something about you. A friend might know you like Leonardo DiCaprio but you don’t like movies with guns. They might know you should get the warranty because the car you’re buying is prone to problems after the fourth year – because they own a car from the same manufacturer.

“We think it’s time for a real, robust, persistent social signal,” says Bing. “Facebook has led a transformation of the Internet already. It has reached and passed 500 million members, and the amount of content created inside Facebook each day is staggering.

Amazon’s Mobile App: See it, Scan It, Put It On Sale! 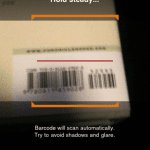 The newest version of the Amazon iPhone app effectively bridges the gap between the product on a store shelf with the same product on Amazon’s virtual shelf faster than you can say “Let’s compare pricing!” Deploying a camera based barcode scanner similar to those available on popular price comparison apps like Red Laser, the new Amazon app supports a more integrated offline-to-online shopping experience, making store owners cringe, but bargain shoppers rejoice.

Amazon mobile is free and for use on iPhone 4 and 3GS running iOS 4.