The head of Advertising Technologies for Russian search engine Yandex earned special status as the top speaker at a special Seattle symposium  last week. the first International Search Summit to be held in North America covering a range of global search and social media topics.  Look for Seattle24x7”s coverage in ShopTalk.

In the session which won Eugene Lomize the Medallion Speaker title, Eugene provided fresh insight into the Russian search market and what marketers need to understand about the country in order to be successful there such as the importance of localizing campaigns for specific cities and regions within Russia, rather than the country as a whole.

Rebecca Berkich outlined the international  search marketing strategies and tactics of Xerox in her talk  about the increasing complextity of international SEO, while Andy Atkins-Kruger of WebCertain looked at the challenges facing agencies working on global search and social projects. Brian Solis, author of Engage, was the keynote speaker for the Localization 2010 conference that hosted the Search summit. [24×7]

If you survived 10.10.10 and woke up early enough on 10.11.10, you were able to tune-in to the announcement by AT&T that they will be carrying the new line of GSM phones running the new, mobile version of the Windows 7 OS.
That makes AT&T the exclusive provider of both Apple iPhone and Microsoft’s Windows Phone 7, even while rumors were confirmed at week’s end that a Verizon version of the Apple iPhone running on the CDMA platform could be ready as soon as the first quarter of 2011.

That puts both AT&T and Microsoft in the position of “Challenger brands”  facing an uphill battle to preserve market share for their legacy franchises. For Microsoft, the question is one of timing, namely playing catchup to the well-entrenched iPhone and Android platforms. AT&T may face a more daunting task, proving it can compete against Verizon’s robust infrastructure in the U.S, market and stem the tide of switchers.

Reports now breaking indicate that Verizon is in a position to buttress its network for the increased network demands that the multi-faceted iPhone can place on their network. What is ironic is that Verizon’s CDMA system does not support the simultaneous usage of voice and data on the iPhone in the same way that A&T has brought it to life.  Watch for the voice-data issue to surface as a major competitive claim when the competing iPhone providers go head to head. [24×7] 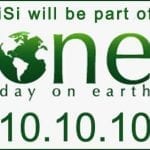 If your digital datebook  managed to usher you through your calendar’s agenda for  10.10.10 in Seattle, you might have been otherwise engrossed in donating $10, $100, or $1000 to help Save Our Sound in a dazzliing auction sponsored by PugetSound.org.