Home ShopTalk Seattle in the Round: A 360° View of High-Growth Scenery and Greenery
Twitter
Pinterest
WhatsApp
Email
Print

The vibrant ecosystem that is downtown Seattle has been dramatically transformed over the past 24 months, both inside and outside of the workplace. Nowhere is the metamorphosis more visible than from the top of the Seattle Space Needle, viewed in time-lapse, 360° videography.

Or, for a more organic view of the city’s morphing landscape on terra firma, journey inside the spherical glass domes that house a verdant biosphere for the natural creature comforts of Amazon.com employees.

First, looking skyward, over the past several months developer Ricardo Martin Brualla has produced a time-lapse video of the changing cityscape with images captured by the HD Webcam atop Seattle’s famous Space Needle.
Brualla, a Google engineer focused on VR and AR applications, stitched together the sweeping views of two full panoramas of the city made each day over a period of two years. The editing work required stabilizing more than 2,100 “panos” that animate the rise of Seattle office buildings and residential towers like beanstalks sprouting up from the concrete gridiron across the city.
A number of fascinating details can be observed in the time-lapse production, including:
– Skyscrapers popping up within the Northeast district of downtown Seattle where zoning restriction caps the building height at 400 feet or 40-story towers. The buildings ascend like an elevator, each stopping at the 40th floor.
– In South Lake Union, an old industrial building is leveled and replaced, stack by stack, by a more colorful apartment building, all within the time span of 18 months.
– Shadows play across the facades of the downtown area as the seasons change and the sun plays hide and seek with the clouds. The Needle’s Webcam captured images at 10:30 am and 2:30 pm daily under all-weather conditons.
– Boats and cruise ships pull into port in Elliott Bay, some appearing like ghost ships as they glide across time and tide.
Clearly, Seattle’s dynamic growth in the last 24 months has been remarkable, and impactful.  The “eye” of the Needle has allowed time-lapse videography to document the rate of that change before our disbelieving eyes. [24×7] 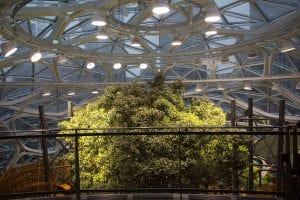 Amazon’s Spheres: It’s a Jungle In There!

Amazon’s lush biospheres, three tropical botanical gardens featuring diverse plant life, winding pathways, and soothing water features, including a hazy mist that warms the greenhouse climate to a sultry, sans-coat climate, are opening up to humans, like Jumanji explorers dropped into a jungle world from parallel universe of desks and office walls.
The biodiversity of the spheres explores the value of conservation in an urban environment. With more than 400 different species of cloud forest plants from all over the world,  the plants range from tiny epiphytes that cling to a 50-foot living wall to Rubi, a 49-year-old ficus tree that resides in the 7th Avenue sphere.

Amazon horticulturist Ben Eiben decrees it as biophilia – the hypothesis that humans have an innate urge to connect with nature – an idea that greatly inspired the initial concept of The Spheres. Studies suggest that spaces that embrace biophilic design can inspire creativity and even improve brain function. With thousands of plants in a variety of natural spaces, The Spheres will provide an immersive and interesting experience to Amazonians and visitors.

The three spheres incorporate a highly complex radial structure and involved a cutting-edge welding procedure performed by 17 ironworkers certified  with the help of the IW Local 86 apprenticeship program.

The Spheres feature a bird’s nest lookout perch, a large circular conference table, plenty of seating slusters and an in-dome cafe offering snacks and picnic lunches, invites the native inhabitants of Amazon offices for an oxygenated walk in the forest right in the middle of a bustling city.
The Spheres also have their own Website at seattlespheres.com   They will be open to the public as part of the company’s 90-minute Amazon HQ tours, which happen most Wednesdays and need to be booked in advance. [24×7]