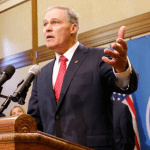 Should the Federal Communications Commission complete its ill-guided mission to undo the country’s net-neutrality rules, Washington Governor Jay Inslee has announced that he and other state leaders will take steps to protect consumers regardless of the outcome.

At issue is the anticipated vote on the plan put forth by FCC Chairman and former Verizon executive, Ajit Pai, to gut the Obama-era rules that are meant to prevent broadband companies such as Comcast, AT&T and Verizon from exercising more “for-profit” control over what people watch and see on the internet.

The governor, who is joined by a bipartisan group of lawmakers and Attorney General Bob Ferguson, detailed several steps the state planned to take, either through rule or legislation.

Those steps include setting up a statewide internet speed test for consumers to use, having state government only do business with telecom companies that adhere to net neutrality principles, and prohibiting providers who are not net neutral from having access to utility poles.

A few bills have already been introduced seeking to prohibit internet service providers from violating net neutrality principles such as blocking content or impairing traffic. The legislative session begins Jan. 8.

Washington state Attorney General, Bob Ferguson, said that he has been speaking with other attorneys general around the nation and will be evaluating the outcome of the vote and “examining whether that rulemaking process followed the law.” He would not rule out litigation that may be taken by states if the vote goes as expected.

At Thanksgiving, representative Rick Larsen of Washington’s 2nd congressional district stated, “The president pardoned two turkeys today. But if there is one turkey that deserves the chopping block, it’s the rule to rollback net neutrality. Rolling back these rules opens the door to practices like paid prioritization and throttling internet speeds – which most of my constituents oppose.” In 2016, Rep. Larsen also voted against H.R. 2666, the No Rate Regulation of Broadband Internet Access Act, which was a bill that would have prohibited the FCC from exercising its consumer protection authorities. [24×7]