Inside the Amazon-Whole Foods Acquisition 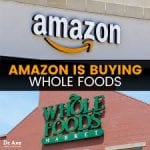 If Alexa can order it, AmazonFresh can deliver it, or you can pick it up at “Will-Call” or zip through the automated, express check-out process, sans-cashier, from your closest Whole Foods Market store, why would you want to do your grocery shopping anywhere else?

That’s the billion dollar question Amazon is betting on by making an offer to acquire Whole Foods for $42 a share in an all-cash transaction totaling $13.7 billion.
The Seattle Times was quick to acknowledge Amazon’s penchant for risk: “While other companies dread making colossal mistakes, Bezos seems just not to care. Losing millions of dollars for some reason doesn’t sting. Only success counts.” Whole Foods’ stock has rocketed 28% on the deal that is expected to close in the second half of the year. The announcement also boosted the value of Jeff Bezos’ 79 million shares in Amazon by 3.6% for a one day, on-paper (not plastic) gain of $2.75 billion.

Inauspiciously, the day before the announcement, Kroger stock plunged 19% after investors found out America’s largest supermarket chain was cutting its profit outlook by 10% and is being forced to lower prices amid heightened competition.

At the same time, low-price grocery Aldi, which is owned by the same company as Trader Joe’s, announced a major expansion in the U.S. Another low-cost grocer based in Europe, Lidl, also opened its first 10 U.S. locations this week, in the Carolinas and Virginia, and it has plans to have up to 100 stores in operation within a year along the East Coast.

“Millions of people love Whole Foods Market because they offer the best natural and organic foods, and they make it fun to eat healthy,” said Jeff Bezos, Amazon founder and CEO. “Whole Foods Market has been satisfying, delighting, and nourishing customers for nearly four decades—they’re doing an amazing job, and we want that to continue.”
“This partnership presents an opportunity to maximize value for Whole Foods Market’s shareholders, while at the same time extending our mission and bringing the highest quality, experience, convenience and innovation to our customers, John Mackey, Whole Foods’ CEO, said in a statement. Mackey will remain CEO of the grocery store chain after the deal closes, and the store will continue to operate under the Whole Foods brand.

“This deal should leave no doubt that Amazon is deadly serious about dominating all aspects of retail,” said Paul Cuatrecasas, chief executive of Aquaa Partners, a London-based investment banking firm. “Amazon is effectively saying that if retailers are going to tool themselves up with technology, then they will tool themselves up with a physical presence and high-street brand.” 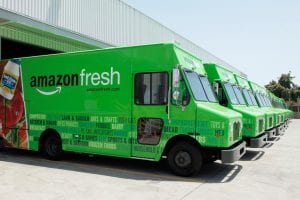 Make no mistake: the grocery and general merchandise business has revolved around limited shelf space governed by shelf schematics called “planograms,” and stocked by human clerks for decades. Mr. Whipple’s traditional model behaves quite differently than the virtually infinite shelf space and endless backlists Amazon can bring to market through robotic warehouse pickers.

The company’s decade-old AmazonFresh delivery service also faces an uphill battle, accounting for less than one percent of all grocery purchases last year. Walmart, by comparison, sold 17.3 percent of the country’s groceries, while Kroger sold 8.9 percent, according to Bloomberg data.  Amazon’s minimal market share was unsustainable for a company needing to show a positive return on investment in anywhere close to the near term.

And that is precisely the point of the deal. Short-to-mid-term profit is more than elusive in this $13.7 billion expenditure, or $129.8 million per store.  Even with modest success, it would take a generation for 400+ Whole Foods’ units to pay back that purchase price.  No, this is not a decision based on profit-making anytime soon for the parent company. Nor is it about infrastructure, with rival WalMart owning ten times as many retail stores, 4500 at last count.

As one analyst put it: ”Technology, and more specifically tech mobility, is creating individual efficiencies in consumer personalization that [will] exceed any investment value that a retailer would necessarily place in infrastructure.”

Translation: The shop-at-home (direct delivery) value Amazon can produce via a synergy of Whole Foods grocery operations and Amazon’s exhaustive distribution network is permanently shifting the locus of consumption in grocery. Amazon is laying a new grocery pipeline where all routes lead not just to food stores, but to our homes. 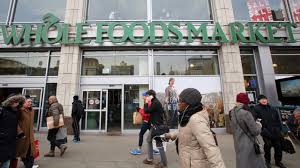 The acquisition also begs the question as to whether the culture of Whole Foods which earned the chiding nickname “Whole Paycheck”  for its lofty prices (like “Asparagus Water,” three stalks of raw asparagus in tap water for $6), can remain appealing following the Amazon mandate to cut prices.

Whole Foods itself has been under pressure from activist investor Jana Partners and money manager Neuberger Berman, who have called on Whole Foods to sell itself. The investors have criticized Whole Foods for its poor performance and have suggested the chain ought to be merged with another grocer.

Whole Foods attempted to placate Jana last month May by shaking up its board of directors. However the hedge fund balked, saying that newly appointed board members did not have the grocery store experience to spark a successful turnaround.

The Amazon offer represents a 27 percent premium to Whole Foods’ closing price last Thursday. With Whole Foods shares trading around Amazon’s offer price, investors appear to be speculating that another suitor might also  make a play for the grocery chain. Among those who could potentially make a bid are Wal-Mart, which has been focusing its deal making on bulking up its digital business, and JAB Holdings, a private equity player that has been shifting its focus to restaurants and food and beverage businesses. 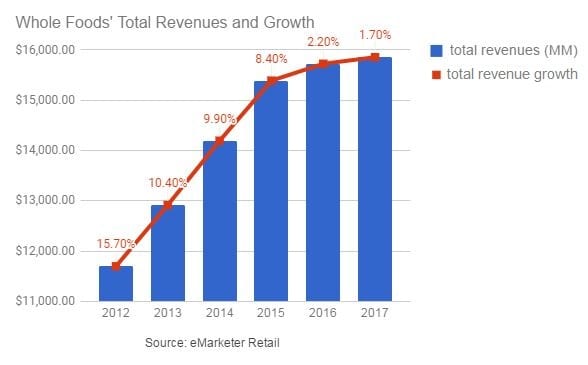 Amazon has long been pushing to expand its online grocery business, seeing it as an emerging opportunity. Currently, few people purchase their groceries online even as more shoppers switch to buying other goods that way. About 12 percent of U.S. grocery shoppers bought their groceries online at some point in 2016, according to Cowen and Company.

Millennials, in particular, were the biggest group of consumers to use online grocery shopping last year. Older millennials, over age 25, were twice as likely to buy online. This generation is starting to get married and have children and will be growing their grocery spend over the next decade.

“The brand is a good compliment to Amazon and would allow them to more aggressively target fresh food delivery to the at-home market,” said Darren Tristano, chief insights officer at Technomic.

Some analysts had seen Wal-Mart being best positioned to compete in the next phase of growth in online shopping because it was going to be able to use its vast footprint of stores to help distribute products ordered online. Also, Wal-Mart has been successful with its so-called click-and-collect model, where shoppers order online but stop by the store to pick up their orders.

“Amazon is known for its competitive pricing, and if it had bought a chain like Shoprite or Acme, it would have made more sense,” Juda Engelmayer, crisis communication and reputation management expert at HeraldPR. “But Whole Foods is a store with generally very expensive real estate, and high prices, which is the opposite of what Amazon is all about, so it’ll be interesting to see how Amazon brings Whole Foods into the fold and adapts to a completely different model.

But changes are expected to be especially noticeable at Whole Foods. In recent years the upscale grocer has attempted to stress value, and even launched a lower-priced Whole Foods 365 line of stores, but for the most part it is still thought of as an expensive place to shop for groceries.

The larger battle, however, goes far beyond groceries, as the New York Times’ Neil Irwin explained on Friday. Why did Amazon buy Whole Foods, and why has Walmart purchased big e-retail players like Jet.com and (just this week) men’s fashion seller Bonobos? “The short answer is because they both want to sell everything,” Irwin wrote.
Amazon has been called the “Everything Store,” and the name rings even truer now that it will have a physical presence all over the country, in a spot that most shoppers have reason to visit once or more per week. It’s not hard to imagine that Whole Foods’ locations will become hubs where consumers can pick up same-day “click and collect” grocery orders, or all manner of other items available at Amazon.com. They will also just be able to go grocery shopping too, of course, at lower prices.
Billionaire Mark Cuban sounded off on Amazon’s ambitious plans with “just one question,” which he posted to Twitter:

“The Amazon Question: Can they get your groceries to you faster than you can get to the store to shop in an Uber/ Lyft world? Yes!”

Cuban is making the suggestion that it will be faster for shoppers to sit at home, order groceries and have them delivered faster than it would take them to get in a car, go to the store and pick them up themselves.
This is huge and, so long as Amazon can get groceries out fast enough, entirely plausible. Amazon hasn’t discussed its intentions for Whole Foods yet, but it seems almost obvious that the company will fold the markets into its Amazon Fresh delivery service, allowing it to make deliveries to customers near Whole Foods locations faster than ever.” [24×7]