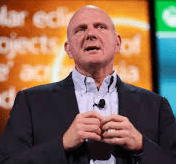 In an era of government where words seem to have become estranged from their literal meaning, where “alternative facts” and “fake news” hang like funnel clouds swirling around the U.S. capitol, and where the House of Representatives can pass a bill affecting millions of Americans without first knowing how much it will cost or how many lives will be impacted, the role of quantifiable data has never been more vital — or harder to find.

The lack of information has been a pain point for Steve Ballmer. After all, it’s been Microsoft’s core mission to make information more accessible to thinking people.

Without the quantitative data that shows baseline metrics, most organizations, including the U.S. Congress, could only guess when and where people are facing critical issues. Without having a qualitative understanding of how people will be affected, we cannot  deal with a problem in real terms. Both are essential to address the public’s needs.

Steve Ballmer, a “Number’s Guy,” Datamines the Answers with USAFacts

A childhood veteran of math camp with an undergraduate degree in mathematics and economics from Harvard University, the former Microsoft CEO  has always called himself “a Numbers guy.”

“Steve sees the world as an Excel spreadsheet,” said Kevin Turner, who Ballmer hired as Microsoft chief operating officer in 2005 and is now CEO at financial firm Citadel Securities.

Ballmer became obsessed with government data in relation to philanthropy. With a net worth somewhere north of $25 billion, Steve wanted to know whether the taxes he was paying were doing their part. Not satisfied with the data he found on either Bing or Google he decided to build the data trove for himself.

Working with data, design and academic experts at Stanford where he has been teaching, and with researchers in the Seattle area, Ballmer ran the project from his 20th floor offices overlooking Lake Washington.

An initial challenge the team faced early on was figuring out how to divide the government into business units. Picture the United States as a corporation. What would its business plan look like?  In fact, there is a founding document that lays out the Plan.  It’s called the U.S. Constitution!

USAFacts was created for “We the People” in order to sum a more perfect communion of the dollars our government takes in and then doles out according to our national imperatives.

Take the paramount mission to “establish justice, [and] insure domestic tranquility.” The USAFacts datastore looks at police, workplace safety and child welfare. “To provide for the common defense” is another slice including military, defense, foreign affairs and immigration. “Promote the general welfare” applies to the economy and how much we spend caring for the poor; and to “Secure the blessings of liberty to ourselves and our posterity,” the numbers reflect our investments in civil rights, environmental sustainability and education.

In the final analysis, how the qualitative aspects of the U.S. Constitution “measure up” can be quantified in some detail, presuming of course the numbers exist to be tabulated.

Mr. Ballmer’s researchers collected information from 55 government or nonpartisan sources, including from state and local municipalities, going back to 1980—the year Ballmer joined Microsoft. They kept their analysis and interpretation to a minimum in order to remain in the unbiased, “neutral zone.”

USAFacts shares the intent of some previous open data efforts. The government launched Data.gov in 2009 to centralize its stats, and President Obama passed the DATA Act in 2014 to get record-keeping standards up to snuff)—but adds much-needed vitality. The platform looks nothing like its bureaucratic counterparts or startups like OpenGov, which also tries to organize and parse government data. Its typeface is pleasingly legible. The site navigation is intuitive. But most importantly, Seattle design firm Artefact has made dry facts and figures actually feel engaging.

The early returns? Contrary to doomsayers, the apolitical, independent Steve Ballmer said the idea that the U.S. is getting worse mostly isn’t true. Infrastructure, such as road and bridge safety, is better than or comparable to 1990. The government doesn’t seem as big as some people say it is, either. Of about 24 million government workers, teachers account for some 11 million jobs; police, firefighters and the like for 3 million; and military for about 2 million. Add in public hospitals, waste management, prisons and other workers, that leaves just 1.7 million or so bureaucrats.

On the home front, the Seattle Office of Economic Development has launched an interactive tool that gives businesses access to information about Seattle’s economy, customers, competition, and more. 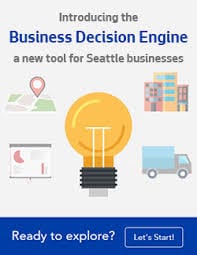 The knowledgebase is primarily intended for small to medium sized businesses who previously did not have the resources or experience to do their own market and location research, though businesses of all sizes and types will find it useful.

If you’re an entrepreneur, you can now discover your industry’s primary customers, learn how to research your competition, identify key transportation and environmental considerations, uncover future business opportunities and more.

‘Data is only useful if it is easily accessible,’ Brian Surratt, Director of the Office of Economic Development said. ‘That’s why I’m so excited about the Business Decision Engine. Through a beautiful and engaging interface, entrepreneurs will have access to volumes of City and partner agency data that together can help business owners make choices about where and how they do business in Seattle.’

‘Before the Business Decision Engine, people had to search several agencies, and even if they found the right data, they may not have had the context to make it useful. Now, all the most important information is in one place and easily digestible for anyone,’ Surratt said.

Seattle worked with a Canadian firm by the name of LocalIntel to complete the research. The online platform is changing the way municipalities and business work together to share information and find opportunities.

Seattle is the first city in the United States to offer LocalIntel’s product to businesses.

The Office of Economic Development and LocalIntel will update the Business Decision Engine quarterly with refreshed data and additional resources. The City invites the community to provide feedback about additional data they would find helpful as they explore the City for opportunities. [24×7]