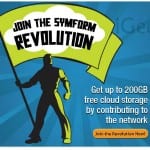 Picture a data backup system where everyone on a shared network contributes their excess local storage space to a grid. Sound ingenious? Now envision free or really affordable cloud storage in ecchange for contributing those bits and bytes.  That’s the focus of Symform.  The big picture could be captioned “Be the Cloud!”  The incredible little secret is that this form of data backup is quite a bit more secure than traditional cloud storage solutions. That’s right, you heard us: More secure!

If you haven’t yet asked yourself why the cost of storing data online is going up while the price of storage media has bottomed out, well, you will!  The answer can be found by looking at the costs behind Centralized Datacenters. Using Datacenters is both inefficient and expensive. Even with increased drive density, virtualization, improved bandwidth, and other technical advancements, datacenters are incredibly expensive and hog energy. And with data growth expected to climb into zettabytes in the coming years, it is hard to imagine how traditional cloud storage will keep pace, even with massive datacenter build-outs by Apple, Google, Microsoft and Amazon.

Heads in the Cloud!

In recent weeks, we’ve reported about Amazon’s AWS server outages in Virginia despite the best intentions to insulate these centers from “heavy weather.” Doesn’t the idea of a “torrential” network of data stores make more sense in an era of networked computing and global climate change? Does to us!

This was the very question that challenged two senior Microsoft engineers who could not justify why a two-terabyte drive costs about $100, but storing that same amount of data in the cloud can soar as high as $1,000 or more every month. Such a challenge ouhgt to breed opportunity, if only they could figure out how to provide secure cloud storage at prices that rivaled local storage costs.

That architecture is now patented, validating the innovative approach Symform’s founders took to solve this challenge. The approach allows customers to leverage the Internet and the abundant unused storage and bandwidth they already own. The result is faster service, with distributed reliability and security, at a fraction of the traditional cost.

Today, Symform is enjoying steady growth, as more cojmputer users are introduced to the concept of cloud computing on commercialized services like CloudDrive, Google Drive, SkyDrive and iCloud. The initial team of two has expanded quickly, and the founders are now joined by experts in cloud computing, distributed architecture, network security, sales, marketing, and more! 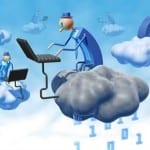 Symform CEO Matthew Schiltz  was previously the president and CEO of the market leading, e-signature company known as DocuSign and  holds an M.B.A. from Seattle University and a B.S. in Engineering from the University of Washington. Margaret Dawson, vice president of product management and marketing at Symform emphasized s that security is the first priority upon Symform’s induction into the  Cloud Security Alliance. “At Symform, protecting and preserving our customers’ data is the top priority. “Our management team has deep roots in cloud security, and we look forward to helping the CSA achieve its mission and collaborating with like-minded leaders to help drive the future of cloud security.”

Need a tempting appetizer to “taste test” the unique entree of networked storage?  Symform offers up to 200 GB of Free Cloud Storage & Backup, with 10 GB FREE immediately and up to 200 GB  available up as you contribute your excess  storage space.

For Chris Guillot, Knowing the Right Methods for Merchants is her...