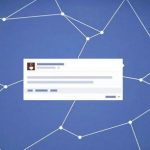 We interrupt this Webcast for a late breaking social media advertising announcement.  Any resemblance  to an online advertising model you may be currently using is purely coincidental.

You now have a choice in how you can communicate your brand’s marketing message in text-based, online advertising with THE  market leader in an explosive new category of online media. You can choose “Organic” optimization for the highest visibility and widest reach without a media charge, OR you can pay a premium for sponsored distribution.

Has this news release been buffered in your browser’s cache since Google AdWords, circa 2003?  Click again. This is the latest status update for Facebook “advertising” in 2012!

Last week, Facebook launched a new paid advertising format called Promoted Posts, which allows Page administrators to turn any Timeline post into an ad that appears at the top of Fans’ news feeds. Promoted Posts increase the chance that more Fans will see it, and that more of their friends will too.

Options include the ability to target posts based on location or language, and track how many people see the post. Any post less than three days old, regardless of type — i.e., status update, photo, video or question — can be promoted using this new feature. Promoted Posts are marked as “Sponsored” in news feeds.

There is, however, a cost for entry. Facebook requires that Pages have a minimum of 400 Likes before Promoted Posts can be used. 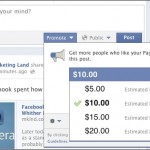 Unlike Google’s performance-based  price-per click which can be as low as a few pennies based on competition and “Quality Score,”  Promoted Posts start at $5.00 each and could scale much higher, depending on the number of Fans and estimated amount of reach. For users who are Fans of several pages, there is a possibility their news feeds could become clogged with Promoted Posts.

Is this the new cost of doing business on Facebook?  Could it be the monetization concept company investors have been waiting for?  What about the “organic” alternative?
The organic side of the Facebook equation is based on the concept of NFO. Yes, Virginia, it rhymes with SEO, but stands for  News Feed Optimization, a method to optimize the deliverability of your Facebook posts.
How do you organically optimize your Newsfeed to reach more of your Facebook Fans? We’re glad you asked.
EdgeRank Is What GIves Your Newsfeed the Edge
Like Google’s PageRank, the critieria for determining Facebook NFO  falls under an algorithm known as EdgeRank and is based on three components:
1. The EdgeScore:  This is the type of content you are posting. Plain text? A link? (Bit.ly works best). A picture?  Unlike Google, Facebook  will not publicly disclose the hard value of your EdgeScore, however, tests show that using a picture in your status update results in a 25-50 increase in visibility. Read on for more EdgeScore “enhancers.” 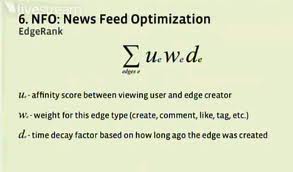 2. Affinity Score. This is the  floating score between an end users behavior and an object on Facebook. How many users “Like” the Status Update?  Do they comment on it?  Do they visit the page? Do they check in?  What are your friends doing in relation to the post?

3.  Time Decay or the Half-Life

How long does the post last on the Newsfeed before it dies out?  Two years ago the “shelf life” was 8 hours.  Now with the Ticker, the half-life is a mere 2-4 hours.

Zach Welch, the VP of Client Services at Brandglue, a firm whose Northwest presence is a few miles north of Seattle, has been refining his competitive edge.  Zach practices the fine art of Facebook NFO for an audience of rabid fans, those in the NFL and the NBA.  Brandglue has managed Fan pages for such professional sports teams as  the NFL’s Washington Redskins in football and the NBA’s Phoenix Suns. The firm also has worked with Microsoft Bizspark and Intuit’s red hot Mint.com.

“People don’t ever come back to a Facebook page, even if they like it,” explains Zach.”  The Phoenix Suns have 750,000 fans. Yet on any given day they have less than 500 people come back to the page.”

Clearly, the Facebook model hinges not on Pageviews but on the Newsfeed.  Since Fans don’t visit you, it’s a question of how you show up on your Fans’ page.

Brandglue co-founder, Jeff Widman and partner David Turner, also founded PageLever, an analytics firm dedicated to making sense of the Facebook algorithm.  An early benchmarketing study undertaken by PageLever measured the average Newsfeed reach of a Facebook page with over 500,000 fans.  The startling conclusion was a mere 7.5%.

“Without Newsfeed optimization, what that finding tell us is that a site with 10,000 fans “may” only  reach 700 people on any given day,” says Welch.

What are the best practices for Facebook Newsfeed Optimizati0n.  Think outside the text.

Use True or False, ‘Yes or No’ Questions Plus Polls or Surveys:  Pose “low friction,” easy to answer questions and  you will trigger easier Comments, Likes and Replies.

Use a Photo.  Analytics show that updates with an image are far more popular and Facebook rewards that fact with wider distribution.  [24×7]