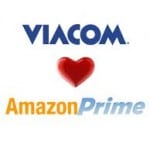 The Viacom deal will bring the total number of Prime Instant Videos to more than 15,000!

Amazon Prime members can enjoy this selection on over 300 different devices, including Kindle Fire–the Kindle for movies, TV shows, music, magazines, apps, books, games, and more. Right out of the box, Kindle Fire users experience the benefits that millions of Amazon Prime members already enjoy — unlimited, commercial-free, instant streaming of movies and TV shows with Prime Instant Video and the convenience of Free Two-Day Shipping on millions of items from Amazon.com.

Prime members will have access to thousands of episodes from Viacom through Prime Instant Video over the next several months. Titles will include kids’ favorites, stand-up comedy, and reality TV. Amazon will offer MTV shows including The Hills, Jersey Shore, The Hard Times of RJ Berger, several seasons of The Real World, and Comedy Central shows such as Chappelle’s Show and The Sarah Silverman Program. For kids, Amazon brings Nickelodeon episodes of iCarly, Dora the Explorer, SpongeBob SquarePants, Yo Gabba Gabba, along with TV Land favorite, Hot in Cleveland.

“Over the last year we have received fantastic customer feedback about Prime Instant Video. We are constantly working to improve the service by adding the shows that our customers enjoy the most,” said Brad Beale, director of video content acquisition for Amazon. “This deal with Viacom brings Prime customers and Kindle Fire users thousands of comedies, kids’ shows, reality TV and much more from some of the best cable networks available. We now offer more than 15,000 movies and TV shows in Prime Instant Videos and are working hard to add even more great content.”