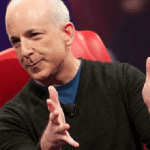 Microsoft Windows president Steven Sinofsky took the bright red hot seat at the All Things D conference this week and like the technical architect of an economic recovery in post-recession America, presented his rationale of where Microsoft has missed certain “windows of opportunity” and how the next generation of Windows seeks to reimagine the future.

The air was thick with irony. Microsoft had a Tablet PC and a Media Center before there was an iPad or an Apple or Google TV. Thus, Sinofsky does not see the problem as being “systemic.”  How could it be when MS arrived on the scene too early?

“We’re not out of the game,” he asserted. In an era where OS bloat has forced platforms to recast their vision of the mobile OS from the ground up, Sinofsky claims that the new Windows 8 OS is no larger than Windows 7. “We realized we could change the OS without increasing the system requirements,” he said.   Bottom line: Windows 8 won’t require any more hardware pushes (memory, disk space graphics, etc) over Windows 7.  It will run on both Intel and AMD, as well as ARM-based chips.

“A lot has happened since Windows 95″–the last major overhaul of the Windows user interface,” said co-presenter Julie Larson-Green.  “We wanted to reimagine how you use Windows.” 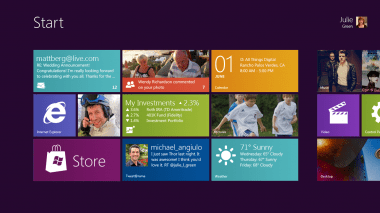 Like a smartphone or tablet, Windows 8 starts with a lock screen, a clock, your upcoming calendar items and notification alerts.  Indeed, swipe up from the bottom and you may think you are looking at Windows Phone 7, including a top-level UI based on Live Tiles.  Each App has its own tile, right down to one designated for, what else, a Windows Store.

Consistent with the current Touch standard, there is an on-screen keyboard with arrow keys. The keyboard can even be split in half with keys on either side to make it easier to type (a remnant of the dual-paned Courier perhaps?).

To move between apps, old or new, users swipe the screen. The interface is entirely user-customizable including tile design and desktop layout.

When will the new Window(s) of opportunity swing open for Version 8?

“It won’t be this Fall,” says Sinofsky. “Every two to three years is a good release schedule (Windows 7 was released in October 2009).” The next milestone is Microsoft’s Build developer conference in September in Anaheim.

is Windows 8 different from TouchSmart or is it simply a layer on top of Windows?  Larsen-Green is adamant on this point. It’s not a layer. It’s Windows. It’s a seamless experience, she adds, noting that you can still access the file system and other core systems underneath.  In short, it is Windows reimagined!  [24×7]