Had the Winklevoss twins taken their idea for what would become Facebook and called on Lee and Lucas Brown (also twins) who happened to be in Boston attending Babson College at the very same time, the history of “The Social Network” might have been very different. Instead of Jesse Eisenberg being nominated for an Academy Award for playing Mark Zuckerberg, it might have been Chris Pine who bears a somewhat closer resemblance to the Brown brothers. 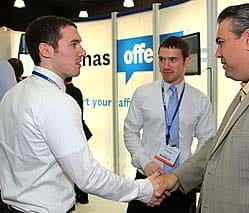 “Brad Pitt would probably be my girlfriend’s choice,” quipped Lee Brown, over the idea of his movie twin. “Or Johnny Depp!” added Lucas. But, of course, had that happened, HasOffers may not have come into existence which would have been an epic fail for the world of affiliate marketing. The Bell Town company has been setting the affiliate world ablaze since its founding in the Spring of 2009 by offering turnkey affiliate tracking and compensation solutions delivered seamlessly via SaaS (Software as a Service) on the Cloud.

Whether on the big screen or the desktop one, the HasOffers founders deserve above-the-title credit for building a top-flight team that has already achieved a kind of Internet celebrity for helping thousands of companies and hundreds of thousands of their affiliate agents keep the gears of e-commerce turning. When the Browns’ began their quest, the barrier to entry for any kind of affiliate sales program was prohibitively expensive. Thanks to HasOffers, today’s independent operator can be the long tail of affiliate marketing that wags the big dog.

Affiliate marketing is often referred to as “performance marketing” in reference to how affiliated parties are compensated. Such parties are typically paid a commission for each sale they close. One of the breakthroughs of the HasOffers’ system is the ability to offer compensation for achieving specific goals that lead up to a sale. This might include generating a lead, a download or another pre-sale behavior. Clearly HasOffers is on the verge of applying the concept of  “The Social Network” to the business of affiliate selling over the Web.

HasOffers was recently recognized as a finalist in the WTIA Industry Achievement Awards for Service Provider of the Year. We got to talk shop with the brothers about peak performance in affiliate sales and tracking.

Seattle24x7: The two of you were at business school in Boston when Facebook was first being hatched. According to the movie, another set of twins played a formative role.

Lucas: Yea, the Winklevoss twins were seniors when we were attending college in Boston. So it was the same time period, but we were working on starting different Internet businesses.

Seattle24x7: Did you guys row crew or play double’s tennis or something as an athletic duo?

Lee: Compared to those two guys, the two of us have completely different passions. Luke is more of the painter, and has the creative force behind him. He tends to focus on marketing and operations. And, I’m the builder, so I build the houses (and the technology architecture) and wait for Luke to come in and do the painting. We have two pretty diverse skill sets compared to the twins who were depicted in “The Social Network.”

Seattle24x7: Where does the Brown bio-pic begin?

Lee: We grew up in Elma, Washington, which is 30 miles west of Olympia. It’s a small town of about 3000 people. We were entrepreneurs at an early age, totally motivated by the concept of starting a business which is what we learned from going to college in Boston, and what we’re doing now.

Seattle24x7: Your paths also crossed with Larry Page and Sergey Brin at The Google Dance, Google’s Open House in Mountain View as part of the Search Engine Strategies conference you attended in San Jose. Come to think of it, I think I was there as well.

Lee: Yeah, I still have my Google Dance T-shirt.

Seattle24x7: HasOffers has demonstrated that you are able to go further with your affiliate tracking, not only to specific conversion events that are pay-for-performance like a sale or sign-up, but to specific actions leading up to a conversion.

Lucas: For the past 10 years in affiliate marketing, everything has been based on the last click [attribution] model. That is where the affiliate who owns the last link the user clicks before a conversion is made, gets all the credit for it. We wanted to take a closer look at how we might compensate and incentivize more affiliates who are involved earlier in the process of creating a conversion. We believe “offer goals” is the first phase to moving in that direction.

Lee: So, for example, an advertiser can go in and say they want to pay $2 for a lead to an affiliate and another $10 for the sale. Once you start getting more touch points and defining more goals, you can start getting more affiliates involved, because it’s easier for the affiliates to see how their traffic is performing.

Seattle24x7: That seems fantastically innovative. Besides those two event types, a lead and a sale, can you identify some other offer goals?

Lucas: Well, let’s take a large software company that is incentivizing affiliates to generate downloads and installs for them. In this case, they used to pay for downloads only because that was the easiest way. Then they might pay for an install depending on whether they could track it. Now these software companies can say, ‘I’m going to pay a dollar per download and then, if you actually install it and you tell our server which user installed it, then we’re going to pay an extra five bucks.’ It’s possible because advertisers can collect data on a more granular basis.

Seattle24x7: That seems like the truest measure of performance tracking.

Lee: The interesting thing is that it reduces the risk, because an affiliate may have to spent between $3 and $4 in their own advertising spend or maybe they have their own blog list and their email operations in the opportunity cost just to make $4.

So the stages of the payout encourages the affiliates to follow through by going further with the sales process. It’s the advertiser’s ability to compensate for these smaller things that is the key to generating quality user engagement. And it lowers the affiliate’s risk of taking on an advertiser.

Lucas: “Offer goals” also reflect how buying habits are changing. Think about Zappos.com, for example. They created a billion dollar company because they realized how buying habits were changing. You might see an ad for a pair of shoes or hear about a pair of shoes from a friend, or on a social site. Then, you might go try on a pair at a brick and mortar store. But you’re going to go home and buy the shoes from Zappos because their price is simply better. They understood that dynamic.

Seattle24x7: So depending on where consumers are in the buying cycle, there are really many things that lead up to the point of purchase. It could be organic sites, or reviews, or social sites and so forth, and you’re giving people a way to participate in that process.

Lee: It’s been a key part of our thinking. Two years ago, we asked ourselves why is it that there is a lack of advertisers involved in affiliate marketing? It was the fact that the barriers were too high. Our competitors were charging advertisers anywhere from $2,000 to $5,000 dollars a month, plus an additional $10,000 in set up fees. We decided to take all this awesome technology that we were using and turn it into a SaaS-based business model that doesn’t require us to set up custom software for each client and streamlines operations. So we’re able to provide a solution at a really affordable price and get marketers more involved in the process.

Seattle24x7: It sounds like a whole new frontier for online advertisers.

Lucas: I think that the challenge of online advertising for a company like Google is the position that they are basically going to charge one dollar per click for a user interaction even while there have been so many other influences on that action. How do you allocate the credit to all those people who were involved? The idea of just compensating for the last click is not the way the industry will operate in the long term. With advances in technology you are going to start seeing more and more people being compensated.

Lee: What’s hot today? Well, you know, Facebook applications, for one. You are going to see a rise in affiliate marketing for mobile applications for iPhones and Androids which is something that people don’t even realize yet.

Lucas: Right now, another thing that is big is coupons.  Groupon has been getting a lot of press. Living Social, and Buywithme.com and Tippr are others who also are HasOffers customers. A lot of these companies have affiliate programs that are distributing coupons for advertisers. It’s an interesting model because they’ve acquired their niche, like the small niche advertiser in Seattle. You can market their affiliate program to all of the United States but they’re distributing the right advertisement for a local consumer in that area. So there’s definitely a lot of cool stuff going on.

Seattle24x7: Speaking of apps, you guys have created a solution specifically for tracking app sales and activations, correct?
Lee: Yeah. We’ve always done mobile tracking but not tracking application installs because of how the app world is set up. You have the iTunes store and the Android store and as soon as your users click through to those stores you lose all tracking information. You can’t use regular tracking via cookies. You can’t do any traditional server tracking because you can’t pass the information into iTunes. So we’ve come up with a unique way to identify users and track the application installs after the sale.

Seattle24x7: Looking at the industry as a whole, where do you see affiliate marketing as a career choice for those who want to overachieve financially. Is it something anyone can be successful at, or mostly top performers?

Lee: You wish it was easy and everybody could make tons of money. But, it’s more than likely 20% of the affiliates are the ones who are really breaking through. And still, just like search engine marketing and “long tail” keywords, it’s the majority of affiliates who are on the tail. They may be contributing on a smaller scale but they can make up most of where your traffic comes from. [24×7]

This article was prepared from one or more interviews recorded and transcribed by Cogi.com