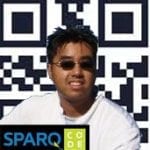 In the new era of social media connectivity, “word-of-mouth advertising” takes many forms: Facebook “Like” buttons and “Status Updates,” Twitter “tweets,”  FourSquare or Gowalla check-ins, and location-based user ratings and reviews. Each of these connections are the latest expression of the time-honored notion of spreading the “good word” over the backyard fence. But how do you “spark” customers to initiate an online connection in the first place?  How do you activate those who are sitting on the sidelines, or in your waiting room, visiting your stores or dining in your restaurant?  In other words, how can you link your prospects’ physical offline presence with meaningful online interaction?

It’s at interactive times like these that a “picture,” let’s call it a two-dimensional barcode, can be worth a thousand words, (or at least up to 4000 bytes of data). Like a Rorschach inkblot, a bar code may not be a thing of beauty to the naked eye, but to the camera lens of a smartphone it is something else entirely. Google got the bar code picture in fast focus when it adopted the QR Code for its Local “Favorite Places”  merchants and advertisers.

With a Google QR code, people can point their smartphones at a window sticker and call up a Google Place page for instance. In Google’s case, the transaction is typically limited to a single page load and typically from a rather inconvenient location, usually outside s store’s front window in the cold and rain.

SPARQCode builds on the shoulders of this ingenious idea in several ways. First it features a conversion path that can be fully-customized. When visitors use their smartphones to  hand scan a SPARQCode, they can be presented with several choices, from customer loyalty programs, to special purchase offers to an invitation to “Like,” “Friend” or review the business by linking through to Facebook or a review site. (And by setting a cookie, future reviews are a piece of cake, if not a piece of cookie.)  SPARQCodes go further by rolling up user analytics as well.  To date, SPARQcodes have been implemented everywhere from Macdonald’s to Subway restaurants to gasoline fillups and dentists’ offices. To see how easy it is to make your own SPARQCode, visit http://www.sparqcode.com/static/maestro Then consider how many different SPARQCodes you might like to display in your business establishment, each representing a distinct call-to-action or conversion path.

To spark our imaginations, and yours, we lit a fire under SPARQCode founder and CEO Jesse Chor about how the WTIA Finalist for Best Seed Stage Company of the Year was managing its success.

Seattle24x7: Jesse, bar codes are beginning to emerge as a new Internet on-ramp for mobile smartphone owners. How would you characterize the fledgling state of the marketplace today?

Jesse Chor: In general, most of the use cases for barcodes are nothing more than a URL redirection service with analytics.  That is where we were at  3 years ago when we first launched, but since then, we’ve evolved a lot. We’ve come to appreciate that companies want to integrate this technology on a grand scale and are looking for an end-to-end solution that can drive action. The bar code is an entry point but at the end of the day what really matters for business, is how do they obtain the desired action.

Seattle24x7: Can you describe the typical engagement process that starts with scanning a SPARQcode?

Jesse Chor: Technically speaking, the bar code detection happens with the software and there are several mobile apps that do a great job of it. We create the high-density, two-dimensional  barcodes that are compatible with the scanning software. What happens is that the software recognizes the contents of a barcode and invokes a particular action on the phone. If there is an embedded phone number, the software will recognize it and might then offer to store it or load it. If it’s a website address, it’ll open the browser on the handheld, and immediately load the web page URL for the browser. It can do a lot more besides. From a high level, you could think of it as a high data payload delivered to a phone at a particular time and place.

J esse Chor: Very much so, and on both ends of the transaction. Most of the small business owners we talk to don’t have the technical expertise nor the resources to leverage social media.  They understand that Facebook and Twitter are awesome, but they don’t know how to use them. Even if they did, they don’t have the time.  So we make posters that are unique to the store. We tie in Facebook, we tie in Twitter, and we also tie in other location-based social media. When customers engage with this poster, it automatically “Likes” the business on Facebook, and it automatically “Follows” them on Twitter. We manage the process which is important because with social media there are constat changes.  Like today there is Gowalla, Foursquare, and other location based check-in and review sites, but new services are always arriving. Maybe next year a new restaurant review site comes on line. So w hen you sign up for our monthly subscription feed, we take care of all the new, future social media services coming on the scene. 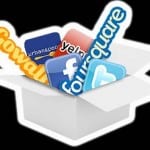 Seattle24x7: You can also provide a user tracking system for offering loyalty rewards?

Jesse Chor: Yes, so a business can reward customers for coming back and flashing their phone. T he response rates are really good. For example, in terms of restaurants, we have a lot of data that proves that putting bar codes in restaurants works especially well if you have reward system. You can generate a lot of traffic compared to traditional marketing media. T he second time they come, the third time they come, we know who they are. We use cookies, and session storage to remember who they are. And we’re very privacy friendly and fully support COPA. People’s privacy rights are observed.

Seattle24x7: You have reserved a number of patents for this technology?

Jesse Chor: Yes, we have a lot of technology around our system that is patent-pending. Such as where we detect the capabilities of a device and optimize for it. Or where we can invoke apps locally on the phone. As an example, not all phones have GPS, and not all phones have YouTube. For the ones that do, we leverage it.  For the ones that don’t, we will fall back on something like rendering a picture. Or rendering something optimized for that device. We’ve designed our system to optimize for the user experience based on the capabilities of the device.

Seattle24x7: So when I’m using the self-service checkout at Safeway and scanning my items, am I getting close to a SPARQCode experience?

Jesse Chor: There’s actually a lot of differences. Technically, “1-D codes” take up a lot of space. So if you look at a UPC code, it might be only 2-inches by 1- inch, which is quite big. But it can’t store a lot of data. It can only store a 12-digit number. In terms of bytes, it’s probably like 4 bytes.  A “2-D barcode” on the other hand is a high density barcode that can store a lot of information. A 2-D barcode also has another advantage because it has error correction. It’s actually a lot easier to scan than at a checkout scan at Safeway! [24×7]