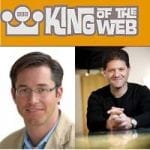 Who will be next to vie for supremacy in Seattle’s social kingdom? It could be the majestically named King of the Web. As the stealth Website had been hinting at for some time, their concept is “simply too amazing, and if you knew it all, your head might explode!”  But now that the names, and the lineage, of the crusaders behind the project have been surfaced, it could be time to start polishing your resume.  You’ll want to put the emphasis squarely on the field of social gaming (Think Zynga of “Farmville” fame or Playdom of Disney M&A), the square where the King of Games resides.

Even in King County, a monarchy can be defined as a series of successive dynasties where the leaders have proven themselves able  to lead their “houses.”  By that standard, Rich Barton and Nick Hanauer would both qualify as kingmakers.  Between the two, you can count either founder’s circle, C-level or board level leadership of (in alphabetical order): Avenue A, aQuanitive, Avvo, Expedia, G02net, Gear.com, Marchex, Netflix, Second Avenue Partners, and Zillow. Not even the mythical House of Rohan had that much horsepower.
But for this installment of Return of the King,  neither Barton nor Hanauer will wear the crown as chief executive, That honor may go to co-founders Scott Howe, Maggie Finch or Wassef Haroun, all startup specialists who also share backgrounds at Microsoft.
Scott Howe was the  founder of the Microsoft Media Network and brings over a decade of leadership experience scaling global Internet and enterprise software companies. Most recently, Howe served as Corporate Vice President Microsoft’s Advertising Business Groups. He arrived at Microsoft through its acquisition of aQuantive Inc. in 2007. During his tenure at aQuantive, the company grew from a pre-IPO startup to a global industry leader with net revenues of nearly $500 million. Howe was also President of Atlas International and Vice President, general manager of Avenue A | Razorfish.  He has served on the Board of Directors for the Internet Advertising Bureau (IAB).

Maggie Finch was Vice President, Media and Generel Manager at aQuantive and formerly a Chief of Staff and GM for Microsoft where she oversaw strategic growth for the company’s advertiser & publisher solutions business.

Wassef Haroun was most recently the founder of Decho Corporation and previously a Program Manager at Microsoft. He is the owner of several patents.

According to published reports, the idea for the new social gaming venture arose on a weekend retreat when Barton and Hanauer began to brainstorm the next generation of startups  in the new era of social connectivity that companies like Facebook are propelling.  A casual conversation of a similar type was said to be the inspiration for Avvo, when Barton and Mark Britton (both of Expedia) were riding bicycles in Italy.

Barton has announced he will be handing over the day-to-day duties as CEO of Zillow.com in order to cultivate new ideas.

Seattle has earned a princely reputation in casual gaming with a bevy a companies based here, from GameHouse and EA to PopCap, Big Fish Games and even the House of Nintendo.  But other than Playdom, which was acquired by Disney this summer and had operations here, the region’s foray into Social Gaming has been less prominent.  King of the Web says it is hiring, “But only Superstars,” the site proclaims. To see if you can pull the sword from the stone, send your resume, or family crest, to resume@kingofweb.com