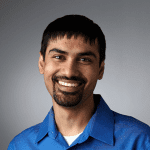 It is a well-known fact that there is more computing power in today’s iPhone than there was on the Apollo spacecraft mission that landed the first human on the moon.

To enumerate just how much power, the iPhone 6’s clock is 32,600 times faster than the best Apollo era computers and could perform instructions 120,000,000 times faster. In other words, or other numbers, today’s iPhone could be used to guide 120,000,000 Apollo era spacecraft to the moon, all at the very same time.

The technical functionality found in everyday devices like a cell phone is ubiquitous if you know where to look. Take the wiring in our homes — it can serve as a smart antenna that monitors conditions such as air quality. And the microphone that lets you talk into an ordinary cell phone? It can also serve as a flowmeter to diagnose lung problems like asthma or COPD. The iPhone camera? Credit it with the audacious “technacity” to detect the presence of  hemoglobin in your blood.

Albert Einstein once said that “The definition of genius is taking the complex and making it simple.” That would aptly describe UW professor and entrepreneur Shwetak Patel who in 2011 won the MacArthur Foundation Genius award. Shwetak has uncovered what is possible from the technology that exists all around us.

Dr. Patel has received other international recognition for his work, including the MIT Technology Review TR-35 award in 2009, a Microsoft Research Faculty Fellowship in 2011, the 2011 India Abroad Face of the Future award, and a Sloan Fellowship in 2012. 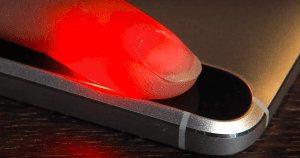 His work was also featured in the cover story of Wired Magazine,”Harnessing the Power of Feedback Loops,” and his past work on camera blocking technology was honored by the New York Times as the top technology of the year. Shwetak is also in charge of the UW’s Global Innovation Exchange, or GIX, a partnership between the UW and Tsinghua University in China.

Born on December 9, 1981 in Selma, Alabama, and raised in Birmingham, Shwetak received his B.S. in Computer Science from the Georgia Institute of Technology in 2003, and a Ph.D. in computer science in 2008. He began as an assistant professor at the University of Washington in 2008, where he remains today. In July 2013, he was promoted to associate professor, and then in July 2014 was named the Washington Research Foundation Endowed Professor.

Fast forward to August of 2017. Shwetak’s latest breakthroughs, the creation of four health care apps, tap the power of the Apple iPhone to perform health screening, collecting data ranging from pulmonary function to hemoglobin counts. The techknowledgy has been spun into a company known as Senosis Health. This month, the health monitoring startup was sold to Google parent, Alphabet Corp., for an undisclosed sum. 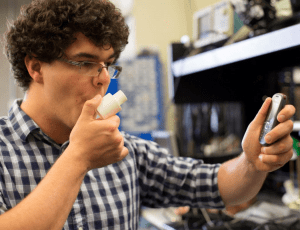 A video spotlighting HemaApp demonstrates how the iPhone’s camera can measure hemoglobin concentration in your blood. The infra-red spectrum of the iPhone’s incandescent light detects absorption of blood under different wavelengths and compares the results with data from a clinical study to determine the blood’s hemaglobin, all without puncturing the skin. Watch it on YouTube at http://www.youtube.com/watch?v=9Gb-uer1cEI [24×7]