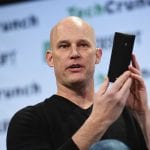 At the 2016 TechCrunch Disrupt Conference, seven out of nine top awards revolved around a single platform. A tip, (or “Tap”), of the hat is in order for Mike George, the Amazon Veep who oversees the prized tech disruptor —the  Amazon Echo product line and its all-too-human, vocal persona named “Alexa.”

With his arching, glabrous brow, we estimate the appropriate hat size for Mike is XXL. Fact is, during his 18 years at Amazon, Mike has worn many chapeaus: VP of Amazon’s Appstore, Games, Cloud Drive and Mechanical Turk, VP of Global Payment Services, VP of Digital, VP of AmazonLocal, and VP of HR. Before joining Amazon, George served as VP, Technology at The Washington Post.

Today Mike George runs the Echo, Alexa, and Appstore teams, overseeing product strategy, technology development, business development, and business operations. While some of the Echo development has taken place at Amazon’s Lab126 in the Bay Area, George covers both venues yet calls the Seattle area’s Whidbey Island his home.

We caught up with Mike at TechCrunch Disrupt where he answered questions about how the Alexa line has raised the IQ (interactive quotient) of countless “smart homes,” sparking millions of conversations or “queries,” each beginning with the wake word “Alexa!”

Q: How would you qualify the success of Alexa thus far?

Mike George:  If you look at Echo, Dot and Tap, [the compete Echo product line], you can get a sense of how it’s selling by the reviews. Echo itself has over 36,000 reviews, a 4.5 rating (out of 5), and I think a third of the reviews reference the word “love.” It’s really resonating with the customer base.

Q: Why is Alexa exciting so many people?

Mike George:  My take is that is largely about the “far field” voice capability.  The fact that you place Echo in your home, wherever you choose to put it, and it has seven microphones that are listening and doing what is called “keyword spotting.” They’re waiting for a “wake word.” In this particular case they’re waiting [to hear] “Alexa.” 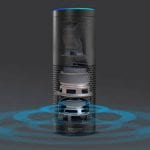 Alexa wakes up and begins streaming what you are saying to the Cloud-based service, the Alexa Voice Service, and while that’s happening it’s doing a lot of technical things that you don’t feel. It’s taking the audio, it’s breaking it into text reliably, it’s then  inspecting that text and our Natural Language Understanding (“NLU”) service is determining the intent.

If you ask “What’s the weather?” it hands that query off to a service that will tell you the weather. The weather comes back through a text-to-speech engine and speaks it all back to you. All that happens in one to two seconds. The device  lets people use one of the most natural interfaces they have — their voice, from up to 25 feet away!

Last June, we opened up two SDK’s.  One is called the Alexa Skills Kit that lets people with existing apps or services  voice-enable those services without having to understand ASR, NLU, learning techniques, neural networking. The other SDK we launched is called the Alexa Voice Service. This is for those who have apps, services or hardware. The hardware could be consumer electronics, TVs, appliances, automobiles, and take the entire Alexa voice experience and embed it in their own equipment or apps.

Alexa has resonated with consumers and developers equally!

Q: Is privacy a concern for this kind of listening device? What safeguards are in place in that respect?

Mike George: Amazon has a twenty-year history of building trust with our customers. From the beginning, when we were designing Alexa, we gave users a way to simply hit a mute button whenever they wanted. Beyond that, as you speak, the device is only waking up when you see the blue light ring.

In the case of Amazon Tap, the only time something goes to the Cloud is when you touch the Tap microphone button. So you have visual indicators, audible indicators, a mechanism to turn the power off to the microphones, and if you want to see what you have said to Alexa in the Cloud, we save your utterances  to your Amazon account so you can see them, you can delete them individually, or you can delete them all.

Q: What is the most common query to Alexa?

Mike George:  There are a number of things that are happening all the time with Alexa. Music is very popular. It was one of the most obvious use cases. We are selling a Wi-Fi and Bluetooth connected speaker and it is connected to your Amazon account. So people would say, “Play Cher.” It’s very simple. You don’t have to be near the device. You’re in your living room, you’re in your bedroom, wherever you are, and you say “Alexa, play Cher!”

All of a sudden, the Alexa Voice Service looks in your Amazon account. Have you purchased Cher before? If so, we’ll play it from your Amazon Music Library. If you’re a Prime member, it looks in the Prime Music Library where we have over a million, free MP3s. If you’re a Pandora, Spotify, or iHeartRadio customer and you’ve bound your accounts to us, you can say, “Play Cher from Pandora.” It may say to you, “I’m sorry, I don’t see a Cher station in your Pandora account —would you like me to create one?” And it creates one.

Another use case that is evolving extremely quickly is controlling your home — your lights, the temperature in your home — more and more things in the smart home can now be controlled. Not only can Alexa automate and voice-enable your apps, we’ve also published some APIs expressly for thermostat heating and cooling services, lighting and switching services and made it easy.

I have a place north of Seattle and I’ve set up Nest thermostats.  I’ve set up “Groups” so that Alexa actually auto-discovers the smart home devices. So I can say, “This one is my living room, this one is my bedroom, and other bedrooms.” I can say “Alexa, turn the temperature in the bedrooms to 68.° And on Whidbey Island, north of Seattle, my thermostats are going to be set at 68°.

The whole idea of using voice as an input mechanism and a way to interact, took something like configuring smart home temperature and lighting, and it made it simple.”

Tech Disrupt notwithstanding, under the watchful eye of Mike George, Alexa has emerged as a disruptive force of the highest order! [24×7]

After nearly two decades overseeing two of Amazon’s most successful products — the Alexa virtual assistant and Echo smart devices — Mike George announced his retirement from the Seattle-based tech giant in July of 2017.

George’s LinkedIn profile now lists him as “Retired from Amazon after ~20 years. Loved every minute. Not checking out, just changing the game :-)”

George will be replaced as the Echo and Alexa chief by Tom Taylor, a senior vice president who has been running the Amazon Payments and Fulfillment By Amazon (FBA) businesses. George also ran the Amazon Appstore, but that part of the business has been shifted to Amazon’s Devices & Services organization, under senior vice president Dave Limp. [24×7]