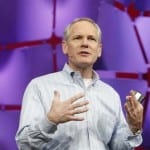 Kurt DelBene, a former executive at Microsoft, has been appointed to lead the oversight of the embattled HealthCare.gov.

Kurt was most recently the president of the Microsoft Office Division and has been with Microsoft since 1992. Bill Gates, Microsoft’s chairman and founder, praised DelBene for his expertise in “managing complex large-scale technology projects.”

“Kurt will provide management expertise, operations oversight, and critical advice on additional enrollment channels, field operations, marketing and communications,” HHS Secretary Kathleen Sebelius wrote. “The president and I believe strongly in having one person, with strong experience and expertise in management and execution, who is thinking 24/7 about HealthCare.gov.”

DelBene joined Microsoft in 1992 and has served in several roles in Microsoft’s product development teams. Prior to his current role, Mr. DelBene served as Vice President, Authoring and Collaboration Services, responsible for the development of Office’s document and Web page authoring and collaboration products. He also served as the general manager of Microsoft Outlook, Microsoft’s messaging, and personal information management application.

Prior to joining Microsoft, he served as a management consultant with McKinsey and Company, focusing on business strategy for technology companies. He has also served as a software developer and systems engineer at AT & T Bell Laboratories, working in graphics and imaging software and network switching systems.

His wife, Susan DelBene, has been the United States Representative for Washington’s 1st congressional district since 2012. She, too, worked at Microsoft from 1989 to 1998 where she was director of marketing and business development for the Interactive Media Group, marketing and sales training for Microsoft’s Internet properties, and other business development and product management roles with Windows 95 and early versions of the Microsoft Internet Explorer Web browser software.

In 1998, Suzan left to help found drugstore.com and serve as a Vice President. In 2000, she went on to be the CEO of Nimble Technology, leading it through its acquisition by Actuate in 2003. In 2004, she returned to Microsoft to be Corporate Vice President of the Mobile Communications Business, until 2007.[7] From 2008 to 2009, she was a management consultant and strategic advisor to Global Partnerships, a non-profit supporting microfinance and sustainable solutions in Latin America.Suzan DelBene was named as the director for the Washington State Department of Revenue on November 30, 2010.