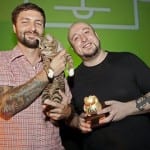 Between LOLCats and Seattle’s Indy video scene, who would doubt that the place where they send fresh fish flying through the air, would become the capitol of cat videos?

To the point, last week Will Braden (at right in photo) picked up the Golden Kitty People’s Choice Award for his two-minute film Henri 2: Paw de Deux. The award was chosen by visitors to the Walker Art Center’s Web site.

Braden created a series of videos starring a French tuxedo cat named Henri, who bemoans his lowly cat existence with his humans and another cat he calls the “white idiot.”

“It was a little overwhelming, but it was a lot of fun,” Will said. “The experience of cat videos is a virtual experience. We share them online by virtual media,” he said. “Will this virtual interest translate into the real world? Will people come out of their homes for this festival? And they did,” he said.

Twice the number of people expected showed up – and Will was the only filmmaker that actually attended the festival.

“The fact that I was there and I happened to win it was perfect,” he said. “I was really humbled by it … 10,000 people cheering for you makes you feel good.”

Will recently set up a website Henri le Chat Noir, selling products from T-shirts to posters via his online store.

He says a portion of the proceeds from merchandise sales will be donated to PAWS in Lynnwood.

“That’s a good feeling,” he says. “They’re a great organization. Henri was a shelter cat. It’s a really cool thing to see it come full circle.”