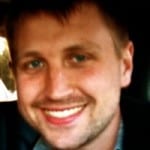 “I will pay $50 for 2 tickets to Laser Bieber at the Pacific Science Center!” “”I will pay $300 for two box seats at the next Mariner’s game against the Yankees!” “I will pay $75 to anyone who can bring me a copy of  The King’s Speech and two pints from Pyramid Brewery.”

Got a need? Can you name your price?  You need Zaarly!

Zaarly connects buyers and sellers in a proximity based, real-time, request-driven market. Buyers make an offer for an immediate need and sellers get to “cash in” on an infinite marketplace for items and services they never knew were for sale. The service went into live demo mode during SXSW in Austin last month and proved the model’s viability for the digerati.

Like CraigsList “Wanted” ads, Zaarly people advertise what they want for how much to people who want to provide services. Sellers, in turn, make their best bid for the tasks, and the buyer chooses the best one, with Zaarly connecting the two via an anonymous Twilio-powered phone number.

At least that’s how the service worked in March.  A new Zaarly is about to be unveiled this month, and the startup company’s new look and outlook is pushing Zaarly Marketing Director Shane Mac to relocate to SFO.

Shane can hardly believe his good fortune, having been part of the marketing team for Gist, which was just purchased by Rim, makers of the Blackberry.  Shane arrived in Seattle after his academic years in Illinois.  His first stop was Cobalt, where, as part of a corporate skunk works team, he fashioned a display advertising system that enabled GM to take an inside sponsorship position on local auto dealerships across the country.  This was just before GM’s financial restructuring put a freeze-dried chill on new marketing, a situation which has since remedied itself. 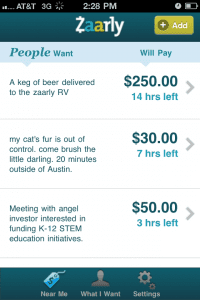 Zaarly has also risen like a skyrocket!  The concept accelerated from being an LA Startup Weekend winner to several million in funding in a little under 3 weeks, impressing a team of investors that included Ashton Kutcher.

Shane Mac has hitched his wagon to another comet! Besides marketing Gist, he’s been the founder of Hello There (http://sayhellothere.com) a way for job seekers to build customized video pages for every job application and instantly know when a company or person views a page and downloads their resume or cover letter. He’s also authored a new book, “Stop With The BS” (http://shanemac.me/stopwiththebs) coming out in 2011.

What’s more, Shane is a professional musician who was voted Best Wedding Band in Seattle for 2009.

Zaarly founder Bo Fishback and the Zaarly team plan to launch the service in six test markets beginning in June, to be followed by a rollout to 32 American cities coast-to-coast.  Another Northwest mover and shaker inside Zaarly is Seattle tech exec Eric Koester — who helped create the idea at a Startup Weekend event in L.A., and, as a result of the early success has decided to leave his post at Seattle-based Appature after five months.

Zaarly founders admit that what happens after Zaarly connects sellers and buyers is entirely out of their control. “How you agree to handle issues like payment and delivery of goods & services is conducted entirely at the discretion of Buyer and Seller and does not constitute any involvement on Zaarly behalf,” says the site’s policy statement. That’s a bit different than the Buyer Protection offered by eBay and Amazon,

After all, transacting everything other than off-the-shelf goods is what makes Zaarly who and what it is, an infinite marketplace for everything beyond pre-packaged product. The idea could well be the future of mobile money and markets when it comes to personal services. Stay tuned! Shane Mac will be circling back with Seattle24x7 with more details! [24×7]