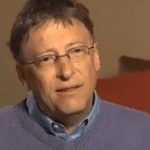 Bill Gates has released his 2011 Annual Letter on behalf of the Bill & Melinda Gates Foundation, the third such letter since the tech visionary became a full-time philanthropist.  The timely letter points to seven initiatives that are global priorities and emphasizes the need for renewed investment in foreign aid to prevent  societies from spiraling into social instability.

“I believe it is the rich world’s enlightened self-interest to continue investing in foreign aid. If societies can’t provide for people’s basic health, if they can’t feed and educate people, then their populations and problems will grow and the world will be a less stable place,” he writes. “Whether you believe it is a moral imperative or in the rich world’s enlightened self-interest, securing the conditions that will lead to a healthy, prosperous future for everyone is a goal I believe we all share.”

Gates views himself as a representative for the world’s poorest people, those who will not have a chance to lobby governments for support. “The world’s poorest will not be visiting government leaders to make their case, unlike other constituencies, so I want to help make their case by describing the progress and the potential I see in key areas of health and development. Perhaps it is ironic for someone who has been so lucky to talk about the needs of those who have not.”

The open letter, which can be found in PDF form on the Foundation site and in video form here, identifies seven key areas the Foundation will focus on in the coming year.

The greatest priority, Gates says, is ending polio. Since hitting its peak in the U.S. in 1952, the number of cases has gone down 99%; now, there are less than 1,500 known cases of polio worldwide. There are just four countries where polio transmission has not been stopped: India, Nigeria, Pakistan and Afghanistan.The Gates Foundation gives about $200 million each year. But the campaign still faces a 2011-12 funding gap of $720 million. If eradication fails because of a lack of generosity on the part of donor countries it would be tragic. “We are so close, but we have to finish the last leg of the journey,” writes Gates.

Other priorities spotlighted in the letter include the fight against malaria. Gates is also committed to saving the youngest children, claiming that 40% of the 8.1 million deaths per year of children under age five, happen in the first 28 days of life or the neonatal period.

HIV/AIDS continues to be a problem despite the fact that the number of people dying from AIDS has gone down by more than 20% in the last five years, to less than 2 million people annually. Gates writes: “Given all the lives that are at stake, I am impatient enough about this that I am willing to be viewed as a troublemaker by people who are happy with the status quo.”

Investment in agriculture, specifically for developing nations, is another important objective to cut down on poverty and hunger. Gates writes that investments in seed, training, access to markets and innovative agricultural policy are already making a real difference worldwide.

In the U.S., the foundation’s biggest investments are in education where, according to the OECD PISA 2009 database, the U.S. was ranked behind at least 16 other countries in each category. Americans were significantly below average in their math scores compared to residents of other countries like Germany and Slovenia. The recommendation: Improved teaching is emphasized in the letter as the best way to enhance the country’s lagging international scores in mathematics, reading and science. [24×7]