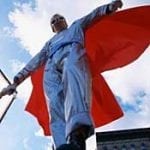 It’s not a gathering of Comic-Con NW or a Swords and Lasers meetup, although the sc-fi connections are palpable.  Is that Bill Gates, the boy wonder, or Jeff Bezos, possessed of Amazonian strength, behind the mask of those costumed vigilantes seen patrolling Seattle streets after dusk?  Like the scientists gone supernova in Watchmen, or the nerds gone wild in Mystery Men or Kick-Ass, there’s a spectre of a chance that the captains of Seattle’s Internet industry are  the alter egos of  these caped crusaders bringing peace and justice to the Emerald City.

In fact, Seattle investigators have identified nine costumed individuals none of whom appear to hold down boring day jobs in the tech sector (but could bring new meaning to the concept of Net security). They go by the names of  Buster Doe, Catastrophe, Gemini, Green Reaper, Penelope, Thorn, Thunder 88, and Phoenix Jones the Guardian of Seattle,

Phoenix Jones, a 22-year-old man who patrols the street in a black cape, fedora, white belt, and mask, revealed his real identity to Seattle police in early November. “Until the police showed up at my godmother’s doorstep, no one had any clue what I was doing,” he stated. “I love this city and I just hope I am there when she needs me!”

“Everyone on my team either has a military background or a mixed martial arts background,”  Jones told the Seattle Post-Intelligencer. “We’re well aware of what it costs to do what we do.” Jones told police he regularly wears body armor and a bulletproof vest when patrolling the streets. Other members of the “Movement” carry Tasers, nightsticks, and pepper spray. They say they do not carry guns.

Every superherp needs a sidekick, and in this case, another guardian is ready to swoop in: “Many of us perform humanitarian work and charitable acts across the country, and for that matter, the world. We’ve fed many hungry people, helped victims of natural disasters, legally obliterated gang graffiti with neutral gray paint and also saved animals. There are as many focuses of need as there are RLSHs. And there are probably about 200 in the U.S. with another 50 in other parts of the world. We’re trained, we mean well, and on most of our parts, calling the police is our first response.

Like Bruce Wayne (aka Batman) and Tony Stark (aka Iron Man), “could the men behind the masks be local Seattle millionaires?” wonders the Belltown Blogger. “It’s interesting to imagine Bill Gates or Paul Allen doling out a bit of vigilante justice in our neighborhood.” [24×7]