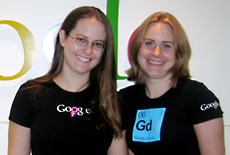 According to the Wikipedia definition, the term Webmaster, could be considered, well, a bit sexist. The catch-all handle for Web architects, managers, producers, designers, and programmers is grammatically amiss as more women (very few of whom prefer “Web mistress”) populate the field as a chosen career path.

On the Seattle Web scene, nowhere is the gender transition more visible than at Google’s Kirkland offices, one of the top four outposts in the global Googleverse, where the dominion of Web search tools, Web sitemaps and Web discussion forums is expertly represented by Msss.Vanessa Fox and Amanda Camp.

As Google Product Manager and Software Engineer, respectively, Vanessa and Amanda have a natural synergy in their relationship, a pairing of linguistics and heuristics, product application and scientific adaptation, a vector path and vector math. When Vanessa starts a sentence to begin an answer, Amanda will often finish it, and vice-versa. The two appear to be of Boolean descent, related to each other like the “and” operator that connects key terms in Google’s search engine.

Seattle’s “Sisters of Search” arrived on the scene as the co-champions of Google’s Sitemap product which lets Web site owners create a stored inventory of their Web page assets, often representing thousands of URLs in an indexed file, called a Sitemap. By identifying and prioritizing the way Google “reads” their Website, Webmasters can make sure Google has a comprehensive view of the site.

The product has since evolved into a full set of Webmaster Tools that lets site managers see any errors Google is having crawling the site and view statistics about how their site shows up in the search results.

Remarkably, Google Sitemaps is only one of an astounding array of innovative products that have hatched from inside Google’s prodigious Northwest incubator. The list is impressive. GoogleTalk, the instant messaging client, launched out of Kirkland, as did the player elements for Google Video. So did GooglePack, Google’s software bundle as well as Google’s Firefox toolbar. Much of the work on Google Maps was produced out of Kirkland. Also SMS Mobile. The hits go on and on.

The seeds for Google’s Seattle-area office were first planted in Zurich, Switzerland, where Shiva Shivakumar pioneered the backend work that became the basis for Sitemaps.  Once Vanessa and Amanda had the Sitemaps protocol, they began the Webmaster-facing issues, working on the interface with “Google Guy” Matt Cutts in Mountain View.  Google teams use videoconferencing to stay in touch with other locations throughout the day.

Both Amanda and Vanessa found their way to Google Kirkland by following their bliss.  Amanda was a math major at University at Arizona, Tucson, before discovering that computer science was her calling. Vanessa hails from southern California where she also studied and worked in Seattle’s Pioneer Square at a Web start-up and at AOL Seattle before making the Google connection.

Now the pair spend a good deal of time recruiting other women to join Google.

“In engineering, it is usually very easy to find men and while there are great engineers out there who are women, it can be harder to find woman,” said Vanessa.

What kind of hiring is Google doing in Kirkland? “We don’t hire for positions,” says Amanda. “We basically look for great engineers. And when we find great engineers and great PMs and we realize, yes, we want these people, we then go figure out where they should be.”  “UW is such a good school. We see a lot of good resumes and good people from there,” she adds.

Mastery of the Web, by either gender, requires the right training. Google has been thinking about offering an online course that steps future Webmasters through the process. In that case, Vanessa and Amanda may take on one more masterly title. That of Web instructor. [24×7]