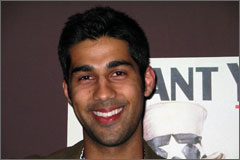 Connecting the dots comes naturally to Kabir Shahani. As one of the inner circle of Blue Dot, a unique social bookmarking site that made its debut a few short weeks ago, Kabir’s personal and professional life is centered on connecting people, places and groups to the best of the Web. As self-titled Dot Connector, Kabir champions a new concept in shared experiences that Blue Dot defines as Social Discovery.

covery asks the question ‘What can I learn from my friends?'” offers Kabir. “What we’ve found, is that book-marking the sites you visit, or creating “dots” on Blue Dot, complete with visual images, comments and personal ratings is a really great way to let people learn more from one another.”

Blue Dot is a whole lot more than a bookmark or tagging service. “For us a tag is not a dot. It’s just one aspect we’ve included that allows any user to organize their content the way they want it.  So, for example I’ll dot Kisaku, a sushi restaurant here in Seattle which a lot of people on Blue Dot haven’t tried yet. I’m going to tag it a certain way because I have a collection of sushi and a collection of restaurants.  But I can also add a comment about the restaurant or the food. The comment feature is very important for us. It brings back more relevant information.”

To begin dotting with

the service, new users download a Web browser extension that adds a “Dot This” bookmarklet to their menu bar. After collecting dots, users can decide to share their discoveries with different groups as they choose. They could have one group of dots for friends, another for co-workers, and another for family. With Blue Dot, social bookmarking can also mean selectivity and privacy.

Prior to joining Blue Dot, Kabir served as project manager for Avanade, a global consulting firm and joint venture of Microsoft and Accenture, where he lead teams and executed software projects for Fortune 500 companies. He also designed and implemented strategic marketing initiatives for Microsoft Live Meeting. Before joining Avanade, Kabir managed the sales support team for Zones, Inc., a solutions based B2B IT reseller. He also worked for the Microsoft licensing team, leading the company in solutions implemented during his tenure there.

A graduate of the UW I-School, Kabir holds a B.S. in Informatics and a certificate in Usability and User Interface Design, both from the University of Washington. He lives in Seattle and enjoys traveling, music, and socializing with friends. Kab

ir also serves on the board of the India Association of Western Washington and as an advisor to their youth program.

How do people use Blue Dot as part of their social interaction offline? “What we’re finding is that people are navigating to a spot and saying, ‘Hey, I want to go try this out this weekend, does anybody want to come?’  Or they’ll say, ‘Hey, I went to this place last night. I thought it was really good or I thought it was really bad.’ The first thing that gets created through those comments is a really good way to stay in touch with your friends. So I can go to Blue Dot on a regular basis and I can

see all of my friends in one view and kind of see what they’re up to.  And I can see, you know, half an hour ago my friend Sung said that he went to Soup Daddy’s for lunch or my friend Eric said that tonight he’s going to see this band at the Showbox.”

“Social Discovery really came about because we found that there were a lot of social sites on the Web that were asking the question “Who are my friends?”  Well, for those of us on our team, and in the demographic we are targeting, we already know who our friends are. What we’re trying to do is stay in touch with the people we already know and learn from them!”

lue Dot to become part of people’s everyday use of the Internet. To “Dot” something should become a household word. “We are dedicated to helping people make stronger connections within their
social networks through the process of “Dotting.”

At last count, nearly 5000 people were sharing those connections — thanks to the Dot Connector. [24×7]

Connecting people, places and groups to the best of the Web, Kabir Shahani is the Dot Connector of Blue Dot Inc.