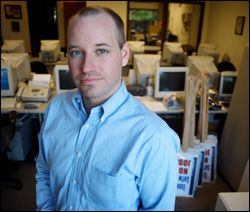 WashTech is focused on promoting Rep. Bill Pascrell’s (D-NJ) H1-B reform bill, which would cap visas at the present number of 65,000, and add reporting requirements for companies that hire workers through this program.

That same week, Microsoft founder Bill Gates was also in Washington D.C. to promote expanding the H1-B visa program. Courtney talked about the week in Washington, the mood in Congress, and the next several months in the debate over H1-B visas.

What did you learn in Washington D.C.?

Courtney: It was a good week because Bill Gates was back there at the same time, talking on the other side about why they (Microsoft and other high-tech companies) need more guest workers.

One thing we learned is that this is really a debate that isn’t dealing with facts. When you raise the H1-B issue with people, they have no understanding of what is really true or not about the program, how the program works, or the true labor conditions for high-tech workers.

Is there really a worker shortage? That argument works because the high-tech industry, in the person of Bill Gates, runs around saying it. So Congress now thinks this is true. But they don’t have any basis for this, no numbers, no facts.

What was it like to be talking about the H1-B visa issue at the same time as Bill Gates?

tney: I think that Bill Gates spends a lot more time working this issue and others than people realize. What was interesting was how visible he was lobbying on this issue: the full-court press with interviews, meetings, talking with David Broder o

f the Washington Post, and Rep. Nancy Pelosi’s staff (D-CA). Everyone was talking about Bill Gates’ visit, and he had a single-minded focus on this issue.

The timing for us was incredible, to be there to give a counterweight to what Gates is saying. We were there saying, ‘This is our position on the issue, and he’s off the mark, the shortage is not backed up by what’s really happening in the labor market.’ And people really listened.

You said that in 2005 companies were freer to talk about offshoring because it wasn’t an election year. How does the election in November 2006 change things?

Courtney: This was the first time in a number of years that representatives and staff were engaged with us and followed u

p on our concerns. I see this as a real opportunity in the election year, as politicians know that Bill Gates is only one vote. If their constituents email and communicate with Congress right now, we can defeat corporate attempts to have unlimited access to workers everywhere.

The actual balance of power right now is with the workers and not the employers because it’s an election year. This is why the industry is trying to do a full-court press now. They read polls, they know American workers are concerned about job security, and people fundamentally know H1-B undermines workers. Not only U.S. workers, but also guest workers, becau

se there are only so many high-tech jobs that are being created.

Courtney: Congress knows people are very concerned about their jobs and the economy, and now Congress members are very in tune with voters on this issue, and want to respond to them. They want to show voters that they are concerned about jobs, and are providing jobs for American workers.

You can see that with the port deal. That was really about outsourcing. I think this (H1-B) is a very similar issue. At the same time this debate is happening, GM announced the cuts of thousands of engineers, and the American public sees this.

Courtney: Clearly the offshoring and outsourcing issues exploded in the 2004 election. Now there’s a real foothold on these issues, and this debate on inshoring builds on that.

One thing that’s been different: if you take a look at who is signed onto the reform bill, the majority of the co-sponsors represent minority districts. Rep. Major Owens in New York represents many African Americans, Rep. Maxine Waters in Los Angeles represents a large African-American district, and in Connecticut, Rep. Johnson’s district is predominantly African-American.

It’s a huge change to have five initial co-sponsors representing minority voices and women. It says there is growing concern in this new economy about jobs, and the idea that the opportunity to get people into positions with high wages is slipping

away from people of color and women.

Who should get the opportunities? Should they go to guest workers, or to Americans, especially woman and people of color?

That’s very different, because all of a sudden this issue isn’t just associated with a 50-year old white male programmer, now it’s about opportunity for more people, High-tech has always been promised as a great leveler in the workplace for minorities and women, and now it’s minorities and women who are championing this issue.

What’s your response to people who say arguing against increasing the H-1B visa cap is isolationist?

Courtney: Nobody is talking about eliminating the program. The idea of allowing for some level of immigration and trying to give flexibility to employers to recruit all over the world, that’s fine. We don’t have any disagreement with that.

The problem is employers are overstating their need. They have no trouble recruiting super talent, but what they are really trying to do is create an excess supply of workers to drive down wages. And that’s really what the issue is, the motives of employers that you have to consider. Why recruit that many workers? To drive down wages.

Courtney: You can’t go below 65,000 because of the WTO (World Trade Organization). That’s the lowest it can go. In reality Congress will never go below that because they won’t want to take on a challenge from the WTO. What we really have to

do is strengthen the protections for the program, and ensure that we are working with actual numbers.

Is Congress willing to consider the Pascrell bill?

Courtney: In Washington State, the majority in Congress is not in favor of the bill at this point. They are not clamoring to sign on to it, because all they hear from employers is that there is a worker shortage, and that employers pay the prevailing wage. And they never ask the employers to back up what they say with facts.

Apart from the H-1B issue, what are some things Congress could do to help U.S. workers?

Courtney: Reform around the L1 visas because they are completely unregulated. That is dead right now, and we need a rene

wed focus on that reform.

Another thing is worker training. Part of the argument for the H-1B program is that employees don’t have the skills, but employers are not investing in their incumbent workers’ training. As for retraining and upgrading the skills of employees doing the work, the industry assumes they have no responsibility, and there is no discussion around that issue.

There is no training mentioned on the latest programs. And the fact that no one is looking at the investments high-tech companies are making in third-world labor markets, that’s a huge issue that needs to be talked about.

Bill Gates recently noted a Bureau of Labor statistic that there is a 3% unemployment rate for computer and math professionals. He said people in those fields could find jobs.

work, or you’re working at Home Depot while you look, that’s not reflected, so that statistic is skewed.

The better question is: Why isn’t the number at zero if there’s so much demand for those workers? It’s basic economics. If there is such a serious shortage as (Gates) says, why is there any unemployment in the field?

What’s the timeline for the two bills in Congress?

Courtney: Where we’re at now is two issues, the immigration reform bill moving through Congress and now the expansion on H1-B visas. They will probably be voted on in the next three or four months.

Even if Congress passes the expansion, by also passing the Pascrell reform bill; if there is enough support around the reform bill, they can reverse any previous decision to expand the H1-B program.

ally, if we “lose this season,” we’ll still have an opportunity next season to correct the problem with the Pascrell Bill.

This is the strongest H1-B reform bill ever introduced in Congress, and that’s the difference; we have a solution. Before, we said there was a problem, but now we have a bill that we can talk to people about; if we work hard there’s no reason we can’t have 150 or 200 co-sponsors behind this bill in next six months, but only if enough people talk to their Congre

ss members about this.

This is a much more strategic approach than just clamoring about the problem. We’re not saying take action seven months from now, because it’s not going to have as much impact as now. That’s very different from where we were 2, 3, 4 years ago.

It’s a real opportunity for people to get involved, and have a metric measuring what progress is being made. [24×7]

Marcus Courtney has presided over WashTech, an innovative and influential union whose members advocate for all technology workers in Washington State and beyond.
“We are a visionary community of activists and a leading voice for our members in the global economy,” states the WashTech mission. “We help build economic security and fair working conditions through collective action, bargaining and legislative advocacy.”