There are those on the Puget Sound Internet scene for whom first name recognition will suffice: Bill, Paul, Rob, Jeff, Dakotta. Dakotta?

Dakotta Alex is a name that can be spotted popping up on any number of Seattle Internet ListServ’s (aka discussion groups) where career networking is a topic du jour.

And rightfully so. This Texas transplant is a born networker who has launched no fewer than half-a-dozen career advancement-or-enhancement Websites. Web properties with names like Fasthire.com, Flyjobs, MentorConnect.com, BreaktheGlassCeiling.com and AskRecruiter.com, most of them in the prototype stage. Last month, Dakotta initiated a new form of rapid networking or “met-working” (as in “Didn’t I meet you very briefly at that fast-moving networking event?”) appropriately called 60secondnetworking.com

The young activist is also involved in politics and has the distinction of being the youngest person in Seattle history to run for a city council position. He received more than 5,000 votes and was endorsed by Washington State Senator Ed Murray, the 43rd District and the Diversity Council. He has worked tirelessly to educate and promote diversity in today’s workplace through his consulting practice and his Internet sites and has also been involved in lobbying for grassroots organizations ECO-CHANGE and the Coalition for Lower Property Taxes (CLPT).

Having worked as a recruiter, HR manager and E-commerce project coordinator, Dakotta is well spoken in the “language” of Internet development, speaking four of them in Web programming parlance: XML, Voice-XML, DHTML, and HTML. His Websites display a flair for Flash and high-impact graphics of which he is equally well versed.

But what really interests Dakotta these days are people. The HR impressario shared his views with us on a subject of keen interest to many nowadays: How to break into the Puget Sound job market and/or succeed in any kind of career advancement endeavor.

Seattle24x7: What tips would you offer the job searcher in 2003?
Dakotta: Right now in this economy, being able to break up your resume is an essential part of the process. The old network positions, the good old boy positions going back to the early 1990’s, were about looking for solid experience in one area. Nowadays, companies like Microsoft applaud you for having multiple skills and experience. Overall, the new approach has to be “How can I help you, rather than what can you do for me? You need to demonstrate to companies how you can come in the door and start solving business problems from the outset.

Seattle24x7: Last month you launched 60secondnetworking.com. What’s the key to optimizing in that environment?
Dakotta: One is not to be shy. They don’t teach you how to network in college. You need to define your point. Get right to it. Have an objective and a goal. Follow up with all the people you meet even if they are not able to help you at the moment. You never know where they will be in five years.

Seattle24x7: Any other advice for “packaging” yourself for success?
Dakotta: Dress for what you’re worth. Break out the Armani suits and the Gucci suits. One person came to the last “60secondnetworking” event in T-shirt and jeans. A number came in suits. Most were business casual.

Seattle24x7: Do you feel that labor unions will assume a future role on the local Internet employment scene?
Dakotta: I do support unionization but in the case of [last year’s unionization attempts at] Amazon.com it was not the time or the place. When a company is starting up is not the time. 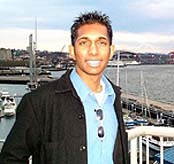