It’s a deep blue summer day in the life of the Puget Sound software industry, and John Chaffee is demonstrating how you can think big by thinking small. Palm size, in fact.

When John arrived in Seattle as a former co-founding member and vice president of marketing for Extensis, a graphic design software tool maker and one of Oregon’s fastest growing companies, he was accustomed to viewing things on a larger scale. He went to work for two of Washington’s most outsized firms – first a brief stint at Adobe as a General Manager on the InDesign 2 product team and then as a VP at Getty Images where he managed a team of six site directors responsible for the development and marketing of Getty Image’s network of stock photography E-commerce sites. As Getty rapidly expanded through a string of acquisitions (such as Tony Stone, The Image Bank and Hutton) John was responsible for a $100 million revenue budget and a multi-million dollar operating budget. (Last week, Getty announced its first profitable quarter.)

But in software companies, just as in handheld computers, bigger is not necessarily better. Chaffee discovered a more family-oriented lifestyle option could exist in Seattle where a marketing entrepreneuer could excel even by staying small. With his former partner from Extensis, VP of Engineering Ray Marshall, Chaffee started SplashData, makers of a popular suite of “small” (some would say indispensable) applications for the Palm Pilot called SplashWallet. The suite includes SplashID for organizing personal IDs, passwords, PINs and more, SplashMoney to manage your checking, savings, and credit card accounts, SplashPhoto for viewing photos of friends and family, and SplashShopper, a shopping list manager, each with a corresponding desktop program for the PC and Mac.

From the outside, few would detect that Splash has the distinction of being a “virtual” company. John is both the president and one of two employees in Washington state. Engineering is currently being done in Oregon and California. That’s very much “by design” in the conservative climate for early stage companies where founders need to prove to themselves that the business plan works and begin to pay investors back (including themselves) before opening up the throttle.

“We’re operating profitably right now. We’re also trying to leverage the business to make as much possible money as we can for ourselves here and now,” Chaffee unabashedly affirms. “Since we don’t have any investors and we don’t have to report [quarterly earnings] to anybody, our objectives are a little different. Our sales in Q3 may be down slightly from Q2, but we’ll probably make just as much profit.” That’s quite a difference from Extensis and Getty where so much of what happened on a day-to-to-day basis revolved around what the company was going to report to shareholders at the end of the quarter. “It makes for poor strategic decision making,” he says, “putting shareholders ahead of your customers.”

The concept of the virtual company is one indigenous to the Internet age. It’s a configuration only made feasible in an environment where frequent online communication and collaboration can occur, evaporating the traditional conventions of time and space. The Internet has yet another starring role to play in customer relationship marketing as anyone who has ever visited the Extensis Website realizes. John was very involved in managing the rapid-response marketing system of the site. “We had automated scripts for replying via email, and we also had a system setup where our telesales reps would follow up with leads within 24hours of software being downloaded. It was a very successful tactic,” he confides.

Although Splash is now working on porting their software to the PocketPC to serve both handheld platforms with “Switzerland like-neutrality,” John filled us in on the latest maneuverings in the PDA wars.

What’s happening at Palm since the company split into the OS software and device groups?
The best thing to happen to Palm in the last year has been Sony. They’ve probably rolled out a dozen different models in the last year [that run the Palm OS], and the data I’ve seen indicates that they’re the only ones that are actually growing. Palm and Handspring’s sales are declining whereas the Palm OS market as a whole is holding steady. That’s been because of Sony.

Is Palm winning the turf battle in terms of “look and feel” and ease of use?
I think the main issue is that the Palm OS is built from the ground up to address the handheld market and the Pocket PC came from the desktop. The PocketPC is more powerful, you can do more with it, such as VPN and Web browsing, but one of the key considerations for a handheld is that it’s got to be small, lightweight and, perhaps most importantly, have good battery life.

Palms can go for a couple of weeks on a single charge through normal use. but a PocketPC can only go a few hours. It’s a much bigger operating system, Windows downsized for a handheld device, and it places much greater demands on the hardware. If you’re traveling and away form your charging cradle for more than a day, the battery will run out. Another issue is cost. You can buy a Palm handheld for under $150. The PocketPC units are in the $500 range. What it all boils down to is that the Palm is really more well suited to the consumer market as far as cost, size and power. But all of that should change over time.

What’s your outlook on the convergence of the PDA and telephone?
The whole market is being approached from several different angles. There are people like Palm or Handspring who are approaching it from a PDA-centric point of view where the handhelds is also a phone. And then there are people like Nokia who are looking at it more from the phone side. I think there’s room for both markets. Nokia is also part of Symbian, which is a third operating system that they’re rolling out now on some of their smart phones. They have a communicator called the 9220. It’s literally the size and shape of a brick, and about that heavy.

What makes Splash Data products so popular?
All of our apps include desktop components for synchronizing between the Palm and the PC or Mac. With, Splash ID, [a Blowfish-encrypted app for storing secure information like logons and bank account numbers] everybody’s got a zillion passwords to remember for Websites or credit card numbers. That’s why Splash ID is so popular.

Why don’t more developers include desktop companion apps for their software the way Splash data does?
Synchronization is very tricky. To be able to edit data on two platforms and then hot synch them and make sure you don’t end up with duplicates or deleting things. It was a pretty significant development effort for us.

Is there a best practices formula for software marketing success?
Our marketing mantra is “ROI”! If we can’t measure it, we don’t do it. We’re very frugal about what we spend our marketing dollars on and if we’re not satisfied with the results, we won’t make the same mistake twice.

Also, we have a very liberal evaluation policy. All of our products will run for 30-days in full functioning trial mode. And we offer a 30-day money back guarantee if customer’s are dissatisfied with the products. And we’re one of the few developers that offers real live phone support from a professional support rep. Our level of polish and professionalism becomes apparent after you’ve tried our software.[24×7] 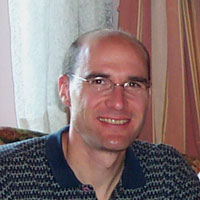 John Chaffee traded the corporate commute to companies like Extensis and Getty for the joy of ownership in a smaller company. SplashData has made big waves with SplashWallet for the Palm.