Look, up in the sky. It’s the Space Needle, it’s a 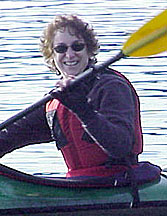 Boeing prototype, it’s a Columbia Center falcon. No, it’s SuperWebGirl! A woman who can scale large databases at a single bound, bend HTML in her bare hands…okay, is this the perfect metaphor, or what?

It is for a career on the World Wide Web. With its multidisciplinary, multi-platform , multimedia approach, Internet development continually demands and cultivates the most extreme skill sets in its practitioners. This wearing of many hats, (and many capes), is especially true for smaller Web development shops and de riguer for independent Web consultants and producers.

Take Jane Lindley of Bainbridge Island’s Super WebGirl. Jane is a personification of the do-it-all Web uber manager. The convergence of code, copy, photograpy, design and animation on the Web has been a vector force that has ray-traced her own career path.

“I’ve always loved computers, even from the time I took a PASCAL programming course in college and realized that one semi-colon in the wrong place could ruin your whole day,” said Lindley. “In school, I got a sense of how programming works, and then I went and worked in the software business for a number of years where I used to write software manuals for a UNIX based system.” Sounds like perfect training for the Web Iron Woman decathlon.

“Then, as a commercial photographer, I got involved in Photoshop because of my love of computers and the ability to work on my images myself. I knew pre-press because I worked in publishing, so all that background just really paid off in the Web. ”

The diversity of experience is practically a requirement for many Web projects. Like a recent project for Captura, the online employee expense management company, in Bellevue. “We produced the whole Website, “explained Super Jane. “Image Ink in Bellevue did the design, and we produced it, including the entire backend. I’m very proud of it because essentially there are five templated interface pages and everything is pulled from the database. The admin tools are so complex that, of course, they’re easy to use. You don’t need to know HTML to update any page in the site. And the site is multi-lingual. We spent about four months working on it. ”

Contrast that assignment with Flash (the name of yet another superhero). Right now, SuperWebGirl is doing online tutorials in Flash for Microsoft’s PocketPC. “I’m working on the Flash portion right now while Chris is working on the regular programming portion if it. The stylus is dancing around the PDA , little menus drop down. It’s a lot of fun.”

Is there a weakness or kryptonite for Super WebGirl? “Illogical design,” says Jane. “I hate illogical design. Part of the Supergroup’s performance is to test the heck out of all Web work so it works with all browsers…even on planet AOL.”

SuperWebGirl’s lair is Bainbridge Island, which Jane explains is far from being a fortress of solitude. “I love it here. It’s quiet. I get a lot of work done, because I’m not in an office environment. I’m not getting interrupted all the time. So, for me, it’s a huge asset. I don’t feel isolated because my community is on the Web. All I have to do is check my E-mail to feel very connected. ”

“I think I probably will grow into an office at some point, but very slowly,” said Lindley.

Photos above: Super WebGirl in superhero uniform and revealing her real identity.