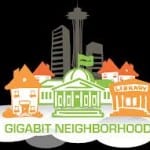 Gigabit Squared, which contracted to build a super fast high-speed network in Seattle, has suffered the ignominy of apparent insolvency, inadequacy and incompetence when it comes to facilitating Seattle’s next generation of broadband Internet access.

Under the plan overseen by former Mayor Mike McGinn, Gigabit Squared had the opportunity to  to lease parts of the city’s fiber optic network in order to bring high-speed internet to residents of Seattle.

However, according to a press release released by the city in November 2013 –Gigabit Squared let the McGinn administration know they were having difficulties securing funding to bring the project to fruition. Due to that lack of private investment funding, Gigabit Squared, which has not yet delivered a broadband system in any city during their five years in business, could not continue their work in Deattle. In addition, Gigabit Squared still owes the City of Seattle $52,250 for services provided to them by the City, including engineering fiber routes, conducting preliminary assessments for their wireless infrastructure, and permit planning.

The City is now at a crossroads and a new fiber strategy needs to be, and will be, explored.

In 2004, a citizen’s task force recommended the city pursue fiber instead of citywide Wi-Fi and, since that time, two administrations have explored ways to build fiber broadband. While this initiative has encountered ,many speed bumps along the way, the city now states that access to a fiber-to-the-home network in Seattle is not “dead.”  The new Mayor is committed to improving the infrastructure of this city and that includes improving the connectivity of its residents. The Mayor is also deeply committed to the affordability of this city and will ask that any other options pursued do not further contribute to the economic divide in Seattle.

Robert Kangas, part of a citizen group called Upping Technology for Underserved Neighbors has been hoping CenturyLink would install fiber optic cable boxes in his Beacon Hill neighborhood for one, but Seattle Department of Transportation codes require telecom utility boxes to be installed below ground.

“We’re totally falling behind. People cannot take classes online, we’ve heard from people from Amazon who can’t telecommute from home. There are lots of financial impacts, including people won’t move into certain areas because it has bad Internet,”Kangas said. 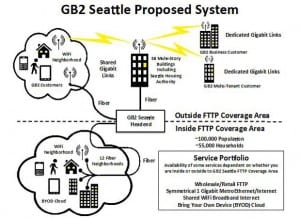 While his hopes with CenturyLink do not hinge on exactly the same method as those providing fiber directly to the home, he said the service would at least be faster than what he has now.

CondoInternet is one company laying fiber and connecting it to the apartment complexes it serves. Download speeds in those 77 buildings can reach 1,000 mbps or 1 gbps.

“The only problem is, that fiber doesn’t exist today. It has to be built,” said John van Oppen, CEO of CondoInternet.

“You pop up your YouTube and it pops the whole screen up. You hit your high definition music video and it starts immediately,” he said.

In other markets,  Sandra Guy at ChicagoGrid reports that Gigabit Squared’s plans to deliver high-speed Internet in parts of south Chicago are unrealized.  GigaOm reports that Gig.U, an entity affiliated with Gigabit Squared, is attempting to distance itself from “implosion,” providing a statement that says they were not “party to any transactions related to such deployments.”

As reported in Geekwire, Ed Lazowska, the University of Washington computer science professor who has advocated for broadband initiatives in the state, said the news of Gigabit Squared’s demise in Seattle is a tough pill to swallow.

“I worry that this will set us back a long way,” said Lazowska, who did not play a role in the selection of Gigabit Squared.

“Seattle simply cannot live with Comcast and NexTel as its broadband providers.  And others, like CondoInternet, are cream-skimming vs. deploying widely.” [24×7]