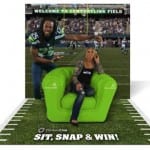 CenturyLink , the Seattle Seahawks’ official high-speed Internet provider, is teaming up with the NFL’s most exciting Northwest franchise and cornerback Richard Sherman for the Ultimate Home Seats Sweepstakes. The social media-driven contest invites Seattle metro-area fans to seek out the Ultimate Home Seat for their chance to win prizes, including coveted Red Zone tickets to a Seahawks game or one-of-a-kind merchandise autographed by Richard Sherman.

“It’s no secret that Seattle is home to the best football team and the best – and loudest – fans,” said Sue Anderson, vice president and general manager of CenturyLink Seattle. “This season, we have a fun way for fans to show their pride and get into the Seahawks spirit with a chance to sit in the Ultimate Home Seat.”

At noon on each Blue Friday beginning Sept. 13 through Oct. 18, a green CenturyLink-branded chair will appear in popular spots around Seattle. Fans can follow the chair @CenturyLinkSea on Twitter to find out where it will be each week. Once at the location, they can sit, snap a picture and share via Twitter or Instagram with the hashtag #HomeSeat or upload it to the official contest page at www.seahawks.com/centurylink. One winner per week will receive a pair of Red Zone tickets to the Dec. 22 home game against the Arizona Cardinals; other winners will receive Richard Sherman-autographed merchandise.

The Ultimate Home Seats Sweepstakes is part of Richard Sherman’s partnership with CenturyLink, as announced last month. The 2012 First Team All-Pro cornerback is also the spokesperson for the CenturyLink High School Athlete of the Week program.

“I love getting fans all pumped for the season – and this contest is an awesome way to give fans a chance to both show their team spirit and win some great prizes,” said Sherman. “Plus they get to take a picture with me standing behind them! Well, sort of…”