Lockerz, the Seattle-based  social commerce company with more than 45 million monthly unique visitors worldwide, has acquired AddToAny, one of the Web’s largest social sharing platforms.  AddToAny enables users to share and bookmark online content with the most popular social networks, news aggregators, email services, and instant messengers.  With the acquisition, Lockerz expands its online sharing and social expression platform, which currently serves more than 1 billion photos per month via Lockers Photos and to date has issued nearly 200 million Decalz (akin to badges).

Lockerz will invite AddToAny users to become Lockerz members and begin earning rewards, or PTZ®, for sharing content.  AddToAny’s existing services, reaching nearly 500 million unique Internet users monthly, will continue uninterrupted for both publishers and users.  Powered by the growing Lockerz platform, users, partners and advertisers will be able to extend their reach and target their desired audiences, including Generation Z.

“Generation Z is a generation who loves to share,” said Kathy Savitt, founder and CEO of Lockerz.  “Acquiring one of the Web’s first and most popular universal sharing tool brings our members new ways to curate the content they care about, while moving us closer to our vision of becoming the homepage for this generation.”

With billions of widget loads, and millions of shares each month, AddToAny’s universal, customizable sharing application is one of the most widely used on the Web.  AddToAny’s platform plugins are the most popular and actively used sharing tools for WordPress and Drupal.  To date, AddToAny’s WordPress plugin has been downloaded over 1.8 million times, and their Drupal module is actively installed on over 14,000 websites.  Over time, Lockerz and AddToAny plan to add key features and functionality to the sharing widget while expanding Lockerz’s network of services. 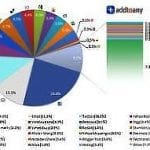 “We joined Lockerz to take our open sharing innovations to a whole new level of engagement and innovation,” said Pat Diven II, founder of AddToAny.  “We’re looking forward to continue our efforts as part of a larger team who pioneers new ways of sharing on the Web.”

As the first generation of “digital natives,” Gen Z is disrupting the way consumers discover, share and shop.  Uniquely, Lockerz members earn PTZ® that can be turned into discounts on great brands.  PTZ are the discount fuel of Lockerz — the ultimate rewards program for Generation Z.  The more PTZ a member earns and decides to use, the larger the discount in Lockerz SHOP.  Additionally, members have the ability to customize their Locker with their favorite “Decalz,” which are showcased for friends to view.  When a Lockerz friend clicks on another member’s Decalz, both members earn PTZ.  If a friend purchases a product or views a video in-full after clicking on a Decalz, both members earn significantly more PTZ. [24×7]