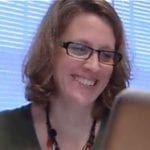 The Big Chill that swept through the Puget Sound last week and put so many Thanksgiving holiday plans on ice became the inspiration for one good-willed cybrarian (that’s cyber user and good samaritan combined)  to raise money for charity  through the clever use social media.

The snow storm turned brainstorm worked this way: Twitter users donate money to a charity of their choice. Then, they Tweet the receipt or e-mailed it to Campbell. Patty then grabs your Twitter profile picture and Photoshops your face into one biug bear hug of a snow parka.  You’ve joined the Parka party!

“What I do is take out the background behind somebody’s face and insert that into the (parka) template in Photoshop,” explained Campbell. Hundreds of people have already donated to charity because of Campbell’s Tweets promoting the party.

“It was the perfect storm,” said Campbell. She got the idea for raising money for charity while watching news coverage this week, seeing reporter after reporter broadcasting from the blizzard while much of the metro area workforce stayed snowed in at home.

“They were watching Twitter, Facebook, engaging in their social communities. It was great because I had a captured audience,” said Campbell. So what does Patty Campbell get out of this? Not a lot. “I lost my job two weeks ago,” said Campbell. Ironically, the free time turned into the creative time she needed to launch the social media project.

“Even somebody with horrible Photoshop skills can make a difference!” she said. At press time, the Parka Party had ended, but perhaps it will kick up again like a squall in the next winter blast. Organizational support for the contest was provided by the Roosiehood Blog which covers news and events around Seattle’s Roosevelt neighborhood. [24×7]