A mock funeral procession for the mobile computing market’s leading smartphones, complete with Hollywood prop department caskets, costumed mobile engineers, and cardboard effigies of both a Google Android phone and an Apple iPhone, took over the streets of the Microsoft’s campus in Redmond last week in a parade that was one part Mardi Gras, one part Thriller-style dance choreography, one part pep rally, and all parts surreal.

As the Windows Phone 7 Mobile Development team took to the streets dressed as zombies, pallbearers, grave diggers, a gorilla, a bagpipe player and other frightful spooks, a crowd looked on in horror, or at horror, in the visage of geeky ghouls. 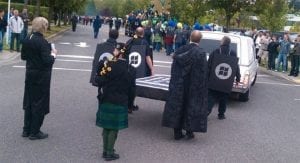 Microsoft Windows Phone 7 is scheduled to launch October 11, but will the long overdue arrival be enough to kill off the competition, even with Zune, Exchange, Xbox Live and Office software on board? A 1.0 version of any new platform, particularly one from Microsoft, has traditionally faced a deadly  uphill battle.

Microsoft hopes its “killer feature” is a more fluid mobile  interface that replaces the familiar screen grid of icons with a streaming series of tiles and hubs in live data. The now dead and buried Kin phones from Microsoft (insert your “next of Kin were notified of the funeral” joke here), brought an innovative social interface targeted at teen consumers, but the Windows Phone 7 GUI will need to be both relevant and compelling to all adults.

The irony of the funeral march was not lost on more cynical observers.  If the Windows Phone 7 effort fails, the funeral could wind up being for Windows Mobile.  For now, Microsoft is out to prove they are very much alive!