That was the misbegotten task of PEMCO Insurance in an attempt to prove what exactly? That the survey group is out of touch with the lifestyle and experience of the society it lives in?  Or that PEMCO, in its stilted methodology and strange survey inception, is out of touch with the market it serves?  Is PEMCO angling to dismiss insurance claims involving canines? Or is it time for PEMCO management to do some serious housecleaning in its marketing and PR departments to excise the utterly brainless, brand-damaging publicity uncorked by its current survey?

The principal question is whether PEMCO is tone-deaf, tactless or simply exposing its own boorishness and insensitivity to its insurance customers by implicating Northwest canine companions for being out of place in imagining service dogs where they are very much in need?

According to the PEMCO press release, the poll in question reveals “sharp differences” in opinion when it comes to sharing certain public places with pets. Sharp differences? PEMCO asserts (and these numbers seem incorrect), that only one in 10 think that all dogs should be allowed to join their two-footed owners in restaurants and stores, while remarkably fewer, only 8 percent, think that dogs – legally permitted service dogs – should be barred from shops and restaurants in all instances.

Who was PEMCO polling exactly, was it cat owners?  And what was their purpose for staging such a poll? Most of the people we asked in our Google+ Circles love their dogs and, if necessary, have zero percent or, conversely 100% tolerance of any problem caused by a canine if they are needed for purposes of service or therapy in a public store or restaurant WHEREVER the situation may arise.

So we have to wonder, what exactly was PEMCO’s agenda in conducting such a poll?  Why is it so prejudicial and off-kilter that impromptu polls seem to flatly contradict the findings? 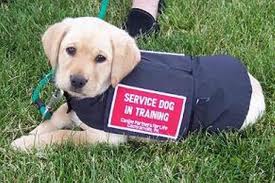 It must have been a slow news week at PEMCO to come up with this contrivance. Instead of focusing on ways to lower your insurance rates, like Progressive’s computerized “Snapshot” driving monitor that rewards good driving habits, PEMCO seems to want to raise rates if you own a dog.

A short leash? Doggone it, PEMCO. We have a shorter leash for insurance companies that publish questionable surveys and reach erroneous conclusions than we do for restraining the blessed animals who are trained from birth to be service or therapy dogs.

If this is the kind of actuarial data PEMCO bases our insurance rates on, we have a lot to worry about!

[The forgoing is Editorial Opinion by Seattle24x7 based on a  Press Release issued by PEMCO Insurance via PR Newswire on  9.19.13.]