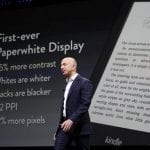 In a show of brillance in technology and boldness in pricing and marketing, Amazon filled the cavities in its fledgling tablet lineup with golden ideas by unveiling three new solutions for the Kindle Fire brand, and unveiling a number of illuminating innovations, both physical and cross-functional,  for E-book readability with a new E-reader technology it calls Paperwhite.

Kindle Fire HD, an i-Pad like nearly 10″ tablet,  now boasts a new larger 8.9″ display (a mere sliver away from the iPad’s 9.7″ screen size) and comes turbo-charged with 4G LTE Wireless service including an economical annual data plan option for just $49.99!  If you’re more into books than movies, the wireless package alone will practically pay for the Kindle Fire device compared to the monthly data rates brokered by Verizon or AT&T for the Apple iPad.

The upsized Kindle Fire 4G is offered for $499, while the WiFi unit sells for $299.  An 8.9″ Wi-Fi only model will sell for $299 for 16 GB of storage or $369 for 32 GB and an upgraded  7″ HD model with an upgraded color screen will be marketed at the same price point as last year’s premier edition, an ultra-competitive $199.  If you’d like to stick with the same standard display as last year’s Kindle Fire but partake of the speed boosts and other new features, your cost-per-entry has fallen from $199 to a new low of $159. The larger color tablets can be pre-ordered now but will ship Nov 20. The 7-inch Kindle Fire ships Sept. 14.

Jeff Bezos bounded onto a Santa Monica, CA stage to unveil not only the new HD enhanced color tablets, but also an enhanced defintion series of e-readers — the Kindle Paperwhite with free 3G (*$179), Paperwhite ($119) with built-in illumination  for nighttime reading, and the traditional Kindle e-reader at a price of only $69 with “Special Offers” advertising (when you’re not reading) or $89 without the advertising. The Kindle Keyboard device with free 3G will sell for $139.  The Paperwhite products ship October 1st.

“Comparison shopping” the new products, the Kindle Fire HD with 4G LTE costs the same as the cheapest version of the Apple tablet, but it offers 4G connectivity and 32 GB of storage, which you don’t get from an iPad unless you spend at least $729.  The 4G LTE service at an astonishing $49.99 yearly fee covers  250 megabytes of data per month, 20 GB of cloud storage and $10 in credit for the Amazon Appstore.  Screen resolution and screen size fall just short of the iPad but the positioning of “regular vs. premium” octane is very clear.

Don’t need 4G? The new Fire device also touts wicked Wi-Fi  with not one but two antennas, which places the device in the MIMO category, for “Multiple Input and Multiple Output.” Add it up and the Kindle HD claims 41 percent faster Wi-Fi than the latest iPad, according to the CEO.

The Amazon ecosystem has mounted a formidable challenge to the Apple iPad’s market leadership in terms of extras.  For Amazon Prime account holders, the Kindle Owner’s Lending Library makes available more than 180,000 books to “borrow” for free with no due dates, including over 100 current and former New York Times best sellers and all 7 Harry Potter books.  A new Amazon format called “Serials” will present books in different episodes for $1.99 a throw.  Is this the equivalent of iTunes for the literary world?  The same synergy brings dozens of free movies to the video side of the Kindle Fire HD.

What is also bold is the way Amazon intends to leverage its  role as a content manager.  Outside of music, pioneered by iTunes, and, of course the preponderance of iOS “Apps,” Amazon can tap into a key advantage when it comes to publishing.  It owns IMDB, the Internet Movie Database, hosts short and long-form, single-edition eBooks, and it can synergize the content it makes available in a variety of ways.

For instance, “Immersive Reading” broaches the conceopt of tying in Amazing Audible book recordings with Kindle E-text, alllowig you to switch back-and-forth between media formats.

The big picture?  Amazon’s “world view”  is that its new products ought to be viewed through the e-commerce prism as services, not as gadgets.

“We only want to make money when people USE our devices, not when they BUY our devices,” declared Mr.Bezos.

For example, Bezos introduced X-Ray for movies on the Kindle Fire HD explaining that users will be able to click on an actor in a movie and find out more about him or her, fed by the Amazon-owned IMDB database. Kindle Free Time is another new feature which allows you to set time limits for different kinds of content on the Kindle Fire HD. Mr. Bezos said he sets time limits for when his children can use games, watch movies or read a book.  Bezos also announced that such partners as Skype, Facebook, Microsoft and others have built custom applications for the new Kindle Fire HD.

The Paperwhite technology adds 62% more pixels and increases contrast by 25%, so whites are whiter, and blacks are blacker. Amazon has also added a revolutionary built-in front light for the perfect reading experience whether you’re out at the beach or at home in bed. Amazon claims the device’s battery will can last eight week’s with the light on.  The new touchscreen added to the Paperwhite likely comes from its acquisition of TouchCo, a start-up it purchased in 2010 that specializes in touch-screen technology.

“It’s thinner than a magazine, lighter than a paper,” Mr. Bezos says. The screen looks like it’s backlit, but it uses a new technology developed by Amazon where the light comes from the screen’s bottom edge. [24×7]