Seattle’s waterfront goliath has been electrically powered and is now just days away from the revolutionary entertainment of millions of Puget Sound visitors, cruise ship passengers, ferry commuters and Northwest fun seekers with a visual spectacle unlike any the city has even seen.

The Great Wheel is being constructed on Pier 57 just steps away from the Washington state ferry system’s Colman Dock and  resides in proximity to other Seattle geo-desic marvels like the Seattle Central Library and the Seattle Space Needle.  It will change the landscape of the waterfront, promoters say, as thousands of programmable dancing, swirling LED lights illuminate the Puget Sound sky against the backdrop of the Olympic and Cascade Mountains.

For those ready to be lifted “above it all”  enclosed gondolas, equipped with heating and air conditioning, will carry riders 175 feet into the air over Elliott Bay.

Each one of the gargantuan spokes of the wheel, which started being hoisted into position on May 4th, weighs in at 3-1/2 tons. That’s a lot of  tonnage for a pier installatin but engineers are apparently satisfied with the ride’s safety features. 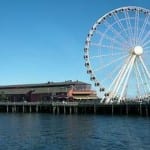 The “big business wheel”  behind the behemoth construction project is Hal Griffith who feels the timing is perfect. With the viaduct coming down, a tunnel coming in and all the construction that comes along with those projects, something needed to be done to keep people coming to the waterfront.

“We were real concerned that if we didn’t have something strong enough to bring people down here that all the businesses on the waterfront would suffer and may even go out of business. So this project is not only ours, but it’s for the community,” said Griffith.

A lifetime dream, Griffith said he has wanted to build the wheel for 30 years, but city approval and permitting never worked out, until he and his sons thought of building it on Pier 57, which Griffith owns.

“We are adding to the skyline and that’ll make Seattle greater than it is now,” said Griffith. 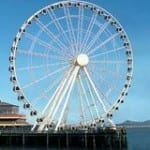 The wheel was originally slated to be up and running by the Fourth of July but organizers are now saying June is the potential lift-off!  [24×7]