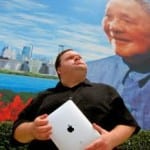 Master storyteller Mike Daisey turns his lens to Apple and Steve Jobs in The Agony and the Ecstasy of Steve Jobs, playing for four weeks only—April 22-May 22, 2011—in Seattle Repertory Theatre’s Bagley Wright Theatre.

Tickets are available now through the Seattle Rep Box Office at 206-443-2222 as well as online at www.seattlerep.org.

Daisey workshopped the piece at Seattle Rep in August and then went on to performances at venues across the globe, from India to Ireland. Seattle Rep has partnered with Berkeley Repertory Theatre and Woolly Mammoth Theatre Company to produce a three-part national tour hitting Silicon Valley, the nation’s capital, and now Seattle. The very successful Berkeley run ended Feb. 27. The Woolly Mammoth leg begins tomorrow.

Press from the early dates called the piece “one of the indefatigable raconteur’s most tightly constructed, passionate and socially engaged monologues yet” (San Francisco Chronicle) and “a theater piece that every Apple fan should see” (Cult of Mac). San Francisco Weekly said, “I haven’t laughed so hard at a play in months.” But perhaps the highest praise came from Apple co-founder Steve Wozniak, who was moved to tears and told the New York Times, “I will never be the same after seeing that show.”

True to the fashion of previous monologues like 21 Dog Years and The Last Cargo Cult, the hilarious, razor-sharp Daisey weaves together gonzo journalism, unscripted performance, and autobiographical tales that cut to the bone of some of the most captivating stories in American culture. For Agony, he follows a trail of technology to China and back, asking the question, “How did one obsessive man change the world to his liking—and at what cost?”

Daisey lived in Seattle until 2001. While in Seattle he developed his signature extemporaneous monologues, which he now tours nationally and internationally to great acclaim, but he returns to Seattle with his collaborator and director Jean-Michele Gregory as an artistic home to develop new work. He performed 21 Dog Years at Intiman In 2003, The Ugly American at ACT in 2005, and Monopoly! at the Capitol Hill Arts Center in 2008. This Seattle Rep production is his first large-scale production in Seattle since then.

“I don’t think Jean-Michele and I have ever worked as hard as we have bringing this piece to light, or have poured as much of ourselves into the work as we have into this story,” Daisey said. “This monologue is the apotheosis of years of journalism, travel, research, investigation, sweat, and tears…and I believe it tells an untold and deeply necessary story for our time.” [24×7]