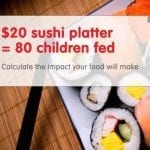 WeFeedback.org, an innovative new social media engagement platform launched by the United Nations World Food Programme (WFP) is using the power of social media to raise the funds needed to feed tens of thousands of hungry children around the world.

“Individual giving is playing an increasingly important role in mobilizing funds for the hungry, and WeFeedback is providing a portal into this brave new world of philanthropy,” said Nancy Roman, Director of WFP’s Communications, Public Policy and Private Partnership Division. “WeFeedback allows people to share food and activate their social networks, transforming something as simple as a cup of coffee or a sandwich into funds that can change the lives of hungry children forever.”

WeFeedback engages supporters through an online “Feedback Calculator” that helps them to work out how many children they could feed if they donated the cost of a favourite food item like sushi, ice-cream, or a hot dog. Through online social networks, followers of WeFeedback can track, in real-time, how many children their community is feeding and what popular food items are being donated in different parts of the world.

Since its roll-out, WeFeedback has discovered that participants from the United States are “feeding back” the most sushi, while the world leaders for feeding back pizza, are not Italians, but citizens of Montenegro. So far, one of the most popular “Feedback” items is birthday cake, but participants have also fed back glasses of wine, cappuccinos and Mexican burritos.

WFP has attracted some high-profile supporters of WeFeedback. The U.S. Grammy Award winning singer, Christina Aguilera, and WFP’s newly announced Canadian National Ambassador Against Hunger, TV personality George Stroumboulopoulos, are currently the biggest individual contributors in North America, while the actress Drew Barrymore, and Brazilian footballer, Kaka – who fed back his favourite meal of rice and beans – are also using the Feedback calculator and have invited their fans to join their WeFeedback communities.  All four of these stars are WFP Hunger Ambassadors.

WFP will be promoting WeFeedback, developed in collaboration with the Duffy Agency, as an ongoing fundraising initiative to support school meal programmes which provide children with a daily lunch or snack, or take home rations for their families. School meal programmes are a proven and effective way of delivering nutritious food that aids children’s development to their full intellectual and physical capacity, and helps them concentrate on their lessons – an investment in the next generation.

Just a few weeks into the launch, WeFeedback has already raised enough money to feed more than 100,000 children. “As WeFeedback continues to grow in popularity, we have the real opportunity to reach millions of children with the right food and nutrition they need to grow and develop their full physical and intellectual potential,” Roman added.

So far, WeFeedback has been rolled out in English, French, Spanish and Italian language versions. Among the private-sector partners that have already signed up to the WeFeedback campaign are Microsoft, Paypal, The Duffy Agency, and Foodspotting. [24×7]