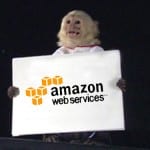 NY Times reporter (and budding futurist), Quentin Hardy, demonstrates a flair for predictions in his reporting on Scalable Data Services.

Consider his coverage of Amazon Web Services: Amazon’s“creative destruction of both traditional book publishing and retailing may be footnotes to the company’s larger and more secretive goal: giving anyone on the planet access to an almost unimaginable amount of computing power.”

Is Hardy shopping a sci-fi screenplay? If so, Amazon Studios may be interested!

Here is the story arc.

Scene 1: “Every day, a start-up called the Climate Corporation performs over 10,000 simulations of the next two years’ weather for more than one million locations in the United States. It then combines that with data on root structure and soil porosity to write crop insurance for thousands of farmers.”

Scene 2: “Another start-up, called Cue, scans up to 500 million e-mails, Facebook updates and corporate documents to create a service that can outline the biography of a given person you meet, warn you to be home to receive a package or text a lunch guest that you are running late.”

Exhibit C: “Each of these start-ups rent data storage and computer server time from Amazon, through its Amazon Web Services division, for what they say is a fraction of the cost of owning and running their own computers.” Utterly astounding!

“We are on a shift that is as momentous and as fundamental as the shift to the electrical grid,” said Jassy,“It’s happening a lot faster than any of us thought.”

Amazon keeps the lid on the revenue A.W.S. contributes to its current $50 billion of annual income. Rough estimates place the A.W.S. portion at about $1 billion which Jassy feels is about 10 percent of its potential size.

Right now just one of the 10 total data centers in Amazon’s Eastern United States region has more servers dedicated to cloud computing than does Rackspace, a public cloud company serving 180,000 businesses with more than 80,000 servers. Amazon also has Regional Data Centers in Oregon and California.

As the rate of expansion has quickened, Amazon has opened four international regions in 2011 in Japan, Ireland, Singapore and Brazil. According to the NYT report, CEO Jeff Bezos is interested in setting up cloud-computing installations for other governments.