Some folks are not going to like this. It requires change. New learning. These folks are going to be dragged kicking and screaming into the future by golly. The rest will embrace the future because it’s just darn exciting. I’m hoping most of you are the “can do” industry professionals who live for new and better ways of accomplishing goals.

The topic is on-line and off-line advertising co-existing to complement one another.

Today, the big budget brands have two budgets. But not for long. One budget is for television, radio, magazine, newspaper, out-of-home and the other for on-line advertising. It is not unusual for clients to have a separate Manager responsible for each budget reporting to one VP Marketing or someone similar. The two Managers compete for budget dollars. The VP decides how much each will receive.

The national agencies have a traditional media department and an on-line media department. These are separate companies (profit centers) in the agency holding “complex”. Each Client/Agency group competes for budget dollars. It’s like radio battling television for budget dollars or newspaper battling radio. Same old story we have witnessed for years.

But just like the “best” media plans most often involve more than one medium, the fight here is really counter productive for a Client. Why? Because the Client most likely needs both but, more importantly needs off-line and on-line media to work together to most efficiently and effectively reach and impact the media targets or components of the media target.

With the media tools available today, we can look at how to best reach these target components – what mediums to use including on-line. It’s not rocket science. Certain off-line media best deliver a younger audience and some best deliver an older audience. On-line has strengths that way as well. Reach/frequency software programs can tell us how much reach and frequency we are generating with a plan against the broad target (25-54 adults) and the components (18-24 or 25-34 etc.). It will generally not be equal reach and frequency when the target components are isolated.

There is also a limit to how much of a target or target component any one medium can deliver. At some point (expenditure level), you deliver more frequency, not reach.

So the smart media planner and his/her Client want to look at how an off-line plan addresses delivery of the target and the target components and then ask what can be done to give this or that component more media pressure. What is the most cost efficient way?

On-line advertising can be the answer. On-line rating points can be entered into standard reach/frequency models to determine what happens to a plan when on-line is added. Overall target reach, or important target component reach, can go up when say $2 million is taken from network television and given to on-line. The $2 million in television was generating more plan frequency but not more reach.

There is much more that can be said about the growing data bases supporting the effectiveness of on-line advertising in terms of generating awareness and image improvements and providing measurable ROI results. There have also been significant improvements in the creative tools available to on-line advertisers. But the real point here is that off-line and on-line media planning will soon be joined at the hip. Any good off-line media planner will be EXPECTED to know how to use on-line media to develop optimal Client media plans.
[24×7] 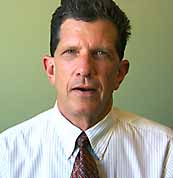 Dan Japhet is the founder of Strategic Media Alignment, a media planning and buying consultancy.
He can be reached at 206-235-2155 or sma1@japhetmedia.com