Approximately 50 million Americans have used Internet audio or video in the last month . This and other findings from a new study – Internet and Multimedia 101: New Media Enters the Mainstream– by Arbitron Inc./ Edison Media Research was revealed late last month. The study examined how the explosive growth in consumer use of both the Internet and streaming media points to the fact that it has become part of mainstream consumer habits.

So who exactly are these people that flock to the Internet looking for movie trailers, music, sports or news? They’re called “Streamies”, and are defined as Internet users who have ever listened to audio or watched video online. With seventy-five percent of Americans now having access to the Internet from any location, (compared with just 50% in January 1999) Internet users who listen and view content online continues to grow.

Contrary to popular belief, people who watch and listen to Internet audio and video are not just 14 year-olds looking for the latest song from Eminem. They are among the most valuable demographics on the Web and worth their weight in gold because:

Aside from the fact that Streamies are twice as likely as other Web users to click on online advertising, they’re not just looking around. They’re buying. The apparent ability of streaming media to engage and involve the consumer is making online advertising as dynamic as advertising in other media – and at the same time, adding a dimension of unparalleled interactivity. And advertisers are beginning to take notice. Consider statistics from DoubleClick’s July 2003 white paper (Rich Media: What? Where? Why?), that indicates that “rich media” (a catch-all term for online advertising, technologically enhanced by motion, sound, video or some sort of interactive element) has grown 60% since the beginning of 2001 and is now nearly 28% of all ads being served.

Search-engine online advertising has leapfrogged to the top of successful Internet advertising options, and the financial returns have been impressive. Search is the second major activity on the Internet – with email topping the list. With millions of consumers using search-engines daily, it’s not surprising that search-related advertising is expected to generate $7 billion in sales by 2007, up from an estimated $2 billion this year . However, most search-engines can only supply text-based search results. If a consumer ultimately wants to see vintage Johnny Carson video footage, that’s more than a couple of clicks away on a traditional search engine. The coveted “one-click” is what consumers and advertisers are looking for. But where’s the call-to-action?

Show Me the Money

With Paid Inclusion advertising that utilize streaming media search results, the proposition gets that much more interesting. If a consumer is already searching for Johnny Carson footage, why not enhance the experience with a customized offer that runs alongside the video? “Buy the Collection Online Now”, or “Download Video to DVD – Subscribe by Clicking Here”, suddenly turns the search result into a potentially profitable opportunity. Streaming media search is growing exponentially. Companies such as Singingfish (www.singingfish.com), AltaVista (www.altavista.com), and AlltheWeb (alltheweb.com) – both now owned by Yahoo! – offer audio and video search results. If you’re using the Windows Media Player or RealOne Player to search for your favorite music artist, or Internet radio station – then you’re utilizing Singingfish search technology. The millions of people searching on Yahoo! or Comcast.net’s newest upgraded portal for broadband can now integrate their experience with both text and multimedia results provided by these streaming media search providers. What does that mean to the advertiser? An opportunity to capture the eyeballs of multiple millions of streaming media users that are actively searching for Internet content that moves, speaks or sings.

“Media Mix of the Future” is Happening Now

Yahoo! obviously saw the dollar signs in search. It spent $235 million to acquire Inktomi, a search engine provider, and an additional $1.7 billion to take over Overture Services that specializes in pay-for-placement search. Under the Overture umbrella came AltaVista and AlltheWeb with their multimedia search offerings. Singingfish shores up the media player market as well as offering audio/video search on major national and international portals. For a fraction of what advertisers currently invest in more traditional media options, Paid Inclusion advertising utilizing streaming media results is an essential part of the modern-day ad budget. Just ask BMW. [24×7]

US Bancorp Piper Jaffray- The Golden Search: Dynamics of the Online Search Market and the Scope of Opportunity, March 2003 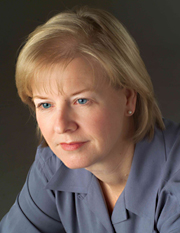 Karen Howe is CEO of Singingfish, Inc., the undisputed leader in audio/video search, featuring the world’s largest index of streaming media. She can be reached at howe@singingfish.com or 883-3000.